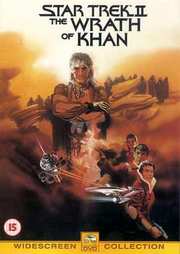 Front Cover of Star Trek II: The Wrath Of Khan 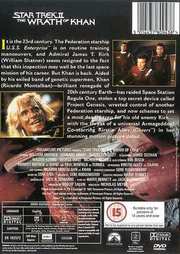 Back Cover of Star Trek II: The Wrath Of Khan
Related Items

DVD
Star Trek II: The Wrath Of Khan (US)

Review of Star Trek II: The Wrath Of Khan

To quote the Animaniacs, "It`s Ricardo Montalban and his fake plastic chest" a.k.a. Star Trek II: The Wrath of Khan. After the dull monotony that was Star Trek: The Motion Picture, Paramount somehow made enough money to justify a sequel. But this time they had to get it right or the franchise would be effectively kaput. That meant using the characters, throwing in some action and getting a decent story and hoping like hell that they didn`t screw it up. The resulting feature was arguably the best Star Trek movie ever made, even after 20 years.

It`s the 23rd Century, and Kirk has been made a deskbound Admiral, again! He`s in the midst of a midlife crisis, as his friends try in vain to cheer him up. But still, there is the opportunity to go back aboard the Enterprise, now a training ship half-filled with cadets to go on a quick jaunt around the galaxy. However, trouble looms as the starship Reliant, which has been searching for a suitable planet to conduct a terraforming experiment, has happened upon the survivors of a group of genetically engineered supermen. Khan, a warrior from the 20th Century had originally been defeated by Kirk, and exiled to a barren planet. The intervening years haven`t been kind, and now the psychopathic superman has taken the Reliant and the ultimate weapon, developed by Kirk`s estranged son, and is now looking to lay a little vengeance on Kirk

The movie is presented in a 2.35:1 anamorphic widescreen transfer and is flawlessly done. The original material comes through well and the picture is sharply defined and lush at all times. Unfortunately, little work has been done on the original material and it does show it`s age. There are a few specks and scratches visible on the film. This isn`t excessive or obvious, but it is something that could have been corrected. This film is 20 years old and it shows also in the effects. If you look carefully you will see the joins, and in today`s world of CGI and similar effects, this film is primitive. But the story is so gripping and the film so well directed that you or on the edge of your seat and hardly ever concerned with FX shots. The FX are competent enough for you to suspend your disbelief and that is more than sufficient.

The sound is top notch; a DD 5.1 soundtrack is simply superlative. Of all the Star Trek films, this one has graced my video most often. I practically have the film memorised (sad but true), but this time, I was hearing things I had never heard before. For instance, near the beginning of the film when Kirk comes out of the simulator room with Spock and walks into the atrium, you can hear faint bird song in the background. It`s this level of sonic detail that breathes new life into a film and this movie has in this way been completely rejuvenated. The music of James Horner adds a resonating nautical theme. The music suits and uplifts the action keeping you thrilled till the conclusion.

Paramount hits its usual nadir with extras yet again. On the disc you get the trailer and that is all, apart from a German soundtrack and several language subtitles of course. The trailer is remarkably pathetic and it surprises me that it was ever used. It reminds me terribly of adverts for the early eighties 8-bit computer games. Speaking of computer games, bundled in the shiny case is another disc, this time a CD ROM, with an entire game on it. Just like Star Trek III, but this time you get Star Trek New Worlds for the PC. You need a Pentium 266 at least to run it with a whole list of other tech specs that don`t have a place in a DVD review. Suffice it to say that the game is a 3D Real time strategy affair where you have to colonize a region of the Romulan Neutral Zone in competition with the Romulans and the Klingons. The game is over a year old and the graphics are fair eye-candy. Unfortunately the manual is again on the disc and requires some tedious task switching or some lengthy printing. The game is fair to middling; most magazines reviewed it between 60 and 70 percent. If you want to buy the game on the high street expect to pay between 10 and 15 pounds. I suppose that it`s good value for money but I would have preferred more extras on the movie itself.

The cast of the world`s biggest television franchise reunite here for their second big screen outing. This is what the fans had really been waiting for. The first movie had sacrificed characterisation for eye-candy, and the eye-candy in question had been less than appetising. Here, William Shatner, DeForrest Kelley and Leonard Nimoy reprised their roles as we remembered them. The magic was definitely back. Ably supporting them, of course were Nichelle Nichols, George Takei, James Doohan and Walter Koenig. Best of all, the cast weren`t past it. In the later films they definitely showed their age, but here it was as if they were as young and vital as ever. A newcomer to the crew was the Vulcan, Cadet Saavik played by a young Kirstie Alley in her breakthrough role. However all eyes are drawn to the psychopathic Khan, played by the charismatic Ricardo Montalban. His portrayal of the fallen prince driven insane by revenge is chilling and he definitely is the star of the movie.

Star Trek II is an excellent film on so many levels. The actors are at their best and the script is excellent. The film touches on so many fundamental human emotions. The fear of loss and of growing old, regrets and missed opportunities, the raw power of vengeance and the ultimate sacrifice. In fact only the sequels cheapen Spock`s death. This film if taken alone is poignant and touching and the final scene a fitting epitaph. The villain of the piece Khan is simply brilliant and thirsts for revenge out of the raw pain of loss and betrayal, not out of some alien motive or higher ideal. He blames Kirk for marooning him on a barren planet and for the loss of his wife. This simple feeling is something the audience can understand and draws them into the film. In later movies, the villains are invariably alien bugbears, Klingons, Borg etc, which serve as convenient bogeymen but fail to engage the viewers as well. The Generations film tried to go back to the personal vengeance idea with the character of Soran but his teeth were pulled by the weakness of the story. The story here is very strong and the film tightly scripted. There are no extraneous scenes and the pacing is spot on for an edge of the seat thrill ride. The direction is well done by Nicholas Meyer who would return for Star Trek VI. Best of all, you don`t need any prior knowledge to watch this. In fact, watching this movie was what got me hooked on the Star Trek phenomenon in the first place.

Before I score this, I should warn you that I am a Star Trek fan so the marks should be considered as just so slightly biased.