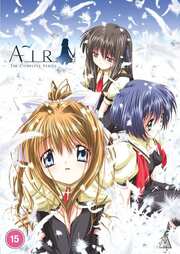 Blu-ray
Beyond The Boundary The Movie: I'll Be Here - Past Chapter/Future Arc

Article
The Anime Review of the Year 2008 Part 2

Article
The Anime Review of the Year 2008 Part 1

I think I may finally be able to resolve a dilemma I have been facing for several years now, since I started watching Key Visual anime adaptations of visual novels, shows that come from the mind of Jun Maeda, and invariably supported by his musical compositions and songs. I have two theories, either the first Jun Maeda show that you see turns out to be the best, for sheer novelty value of discovering something you’ve never experienced, and everything you watch subsequently diminishes in one’s estimation, as you see certain tropes and plot mechanisms repeated... Or Jun Maeda got it right first time, and everything since has been an attempt to live up to past glories. Either way, the outlier, self-parody Angel Beats is the exception that proves the rule. 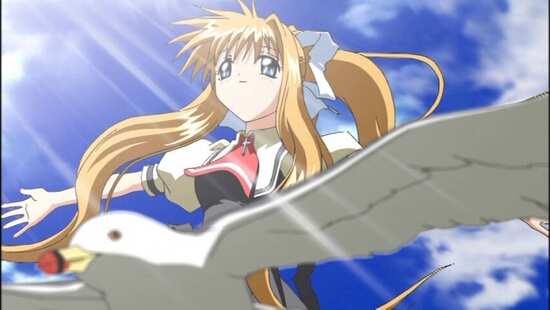 I watched the second show, Kanon first, and I still love it, and nothing has lived up to it since in my estimation, not Clannad, not Little Busters, and certainly not Charlotte. And now, MVM are filling in the two gaps in the Jun Maeda back catalogue here in the UK, releasing Kanon (I originally imported it from the US), and the first Key Visual adaptation, Air. Now, I get to find out which one of my theories is correct. Is Air the best of the bunch, or is it just because I watched Kanon first, that nothing else lives up to it... 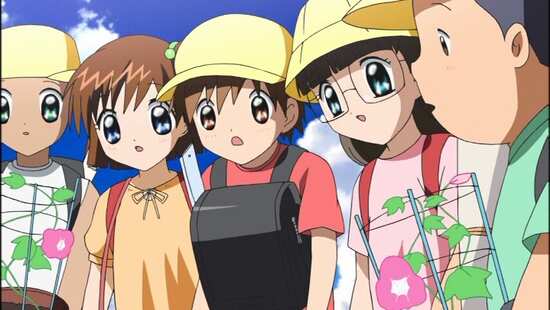 When Yukito Kunisaki was a child, his mother told him of a place beyond this world, where dwells a girl with wings, aloft in the sky. When he grows up, he sets off on a journey to find that girl, supported by his talent as a puppeteer (helped in no small part by a telekinetic ability). When he comes to a small, seaside town, he finds that his talent doesn’t impress the locals. But he meets a lonely girl named Misuzu Kanio, who invites him to stay with her and her mother Haruko, and he winds up getting a part time job at a local clinic to make ends meet. But Yukito may have come to the right town regardless; for Misuzu has dreams of an alter ego, with wings and who can fly, and she isn’t the only girl in town who has such experiences. 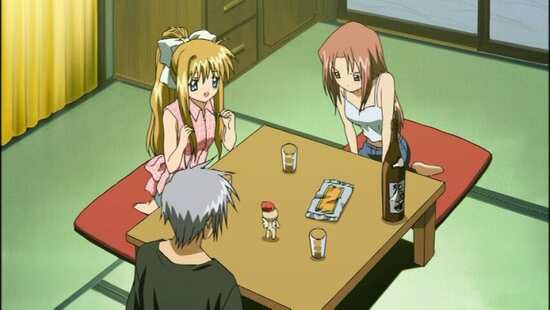 The twelve episodes of Air are presented on two DVDs, and the OVAs are presented on a third disc from MVM. Note that the original release had a faulty disc 1; the first two episodes had the wrong subtitles applied. That should be corrected now, but if you get the wrong disc, just contact MVM via their Anime Online website and ask for a corrected disc. 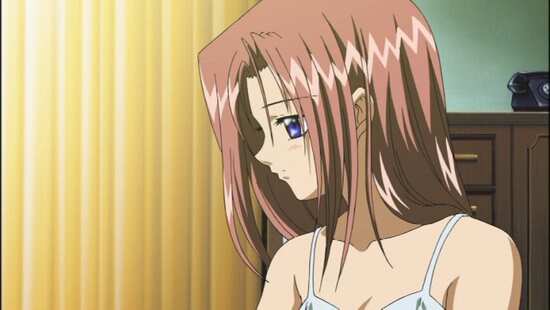 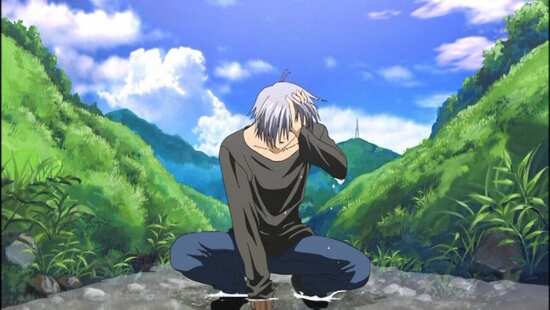 Air gets a 1.78:1 anamorphic NTSC transfer on these discs. The image is clear and sharp, and colours are strong. The animation comes across with a minimum of visible compression, although aliasing is a little more apparent than usual. In this case it seems like it’s more a case of the source material rather than an issue with the transfer, given that this is one of the earlier digipaint shows, made when companies were transitioning away from traditional cel and paint to the new digital animation techniques. 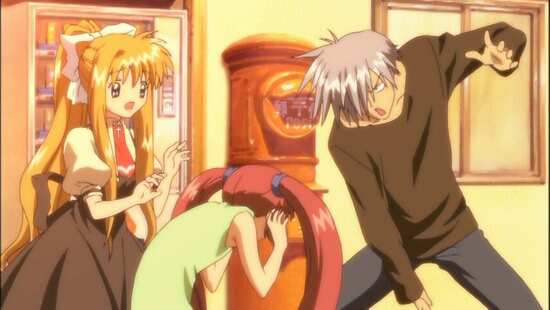 Air is a Kyoto Animation production, but given that it dates from 2005, it is one of the first shows that the company produced (along with two of the Full Metal Panic series). If you’re expecting the idiosyncratic character designs evident in shows like Clannad and K-On!, or the sheer visual flourish of shows like Beyond the Boundary, then you’ll most likely be disappointed. This is a comparatively run of the mill show in terms of character and world design, although the seaside locations allow for some evocative lighting use. What makes Air stand out in comparison to other anime of the era is the level of effort put into the character animation itself, which is a cut above, and still an indication that this is a KyoAni production. 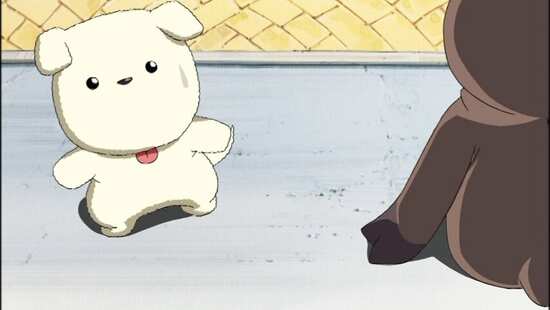 You have the choice between Dolby Digital 5.1 Surround English and Japanese with optional subtitles and a signs only track. The OVA disc 3 also offers DD 2.0 English and Japanese in addition to the surround tracks. While the discs may be Funimation sourced, the subtitles and dub were created originally by ADV Films. As per usual for these titles, the 5.1 mixes sound like glorified up-mixes of the stereo, and it’s a bit of a shame that the original stereo wasn’t available on the main series discs as well. The dialogue is clear, and the actors are suited to their roles (in the Japanese version that I watched at any rate). The subtitles are accurately timed and are free of typos. This being a Key/Visual title, it’s the music that is a key selling point, and it’s no surprise that Lia provides the theme songs as in Kanon and Clannad. 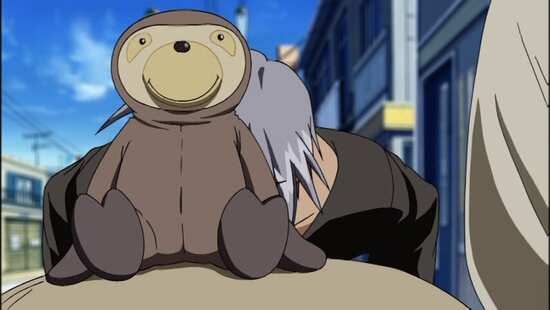 The discs present the contents with static menus.

The extras on disc 3 comprise the textless credits for the OVA episodes, not for the main series. 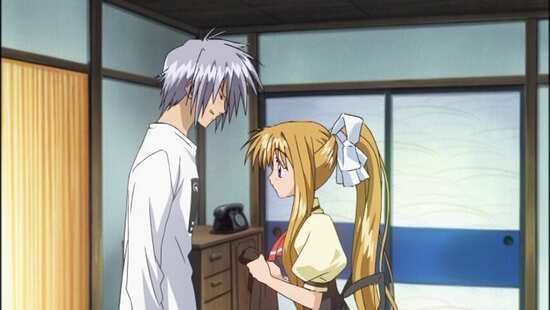 I don’t really have an answer to my theory, having now watched Air. With the first few episodes I was certainly in the mind of thinking that the first Key show experienced is the best, and with me having watched Kanon first, I didn’t think that Air stood up all that well in comparison, especially as I watched the creators wheel out all of those tropes, or rather what would later become tropes. The cute girls making cute meaningless noises, the mysterious fatal illness, the tragic pasts, and the amnesia... all these things are present, and are common across all of the Key Visual titles. It’s the one where you don’t see them as tropes that will impress, and everything after that will seem derivative. But then Air does something really quite special, putting together a startlingly strong conclusion, and really telling an effective story in its 12 episode run. 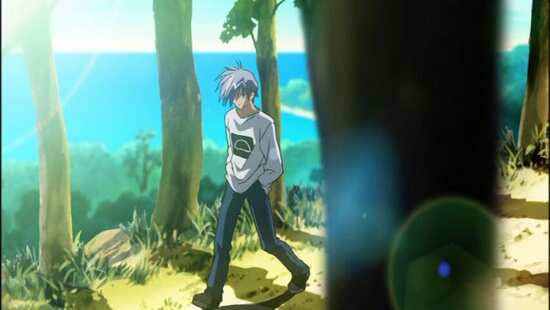 What also impressed with Air is that it doesn’t pander to fans, offering an ultimately downbeat story which focuses on cyclical and mythical tragedy. Spoiler; don’t look for a happy ending here. Kanon on the other hand, while it had its moments of tragedy, was ultimately a triumphant and joyful show, which some might consider a crowd pleaser. Of course Clannad tried to have its cake and eat it, by giving us both a tragedy and a happy ending, and coming off even more contrived as a result. 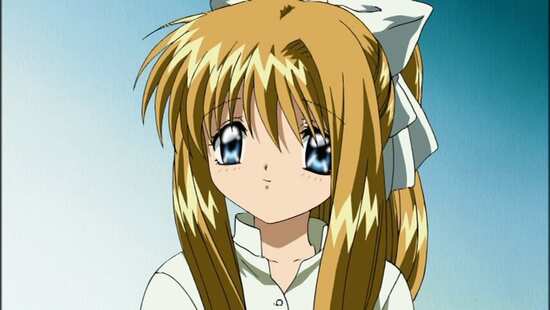 Air also doesn’t feel the need to explain all of its mysteries, doing enough to tell the story, and instead leaves it to the viewer to contemplate and explain. Halfway through the protagonist leaves, followed by a flashback a thousand years into the past, and then it appears to start the story all over again, the same events, and the same characters, only there is a new perspective as well, a new character of sorts. There’s no explanation of this, you’ll have to decide whether it’s some fourth dimensional reincarnation or a parallel reality. And it in the end it really doesn’t matter, as like the subsequent Key Visual titles, this show is about manipulating the empathy and emotional responses of the viewer, rather than challenging the intellect. Tears will be evoked while watching Air. 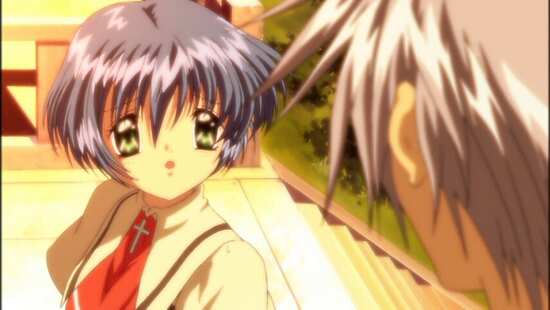 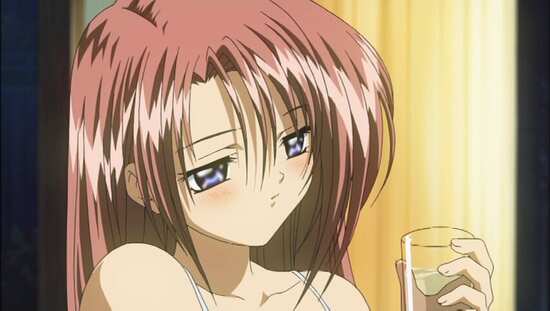 The protagonist arrives in the show’s setting (here a seaside town) where he will encounter several girls and women. The show will provide a main character for the protagonist to ‘romance’ and several side characters who have mysteries that need solving. Here, Yukito first encounters Misuzu, an infantilised girl who suffers from social withdrawal, living alone with her adoptive mother. She is medically incapable of making friends, has the mysterious fatal illness that one girl in each of these series has, the kind of narrative conforming malady that presents in strange, magical symptoms. Here, if she makes friends with anyone, it causes a debilitating emotional reaction in her, and brings ill fortune to the other, and could lead to death for both. 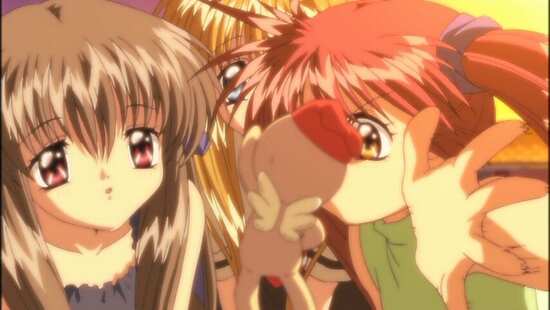 Yet this summer she decided to try to get close to the homeless puppeteer who fails to make a living busking for the local kids, to the point where she invites him to live in their family house with her and her mother. Reluctantly, Yukito starts to try and rehabilitate Misuzu, uncovering more and more secrets behind her illness. At the same time he meets the other denizens of the town, and meets another two girls who have problems that need solving. A mother and daughter have an issue with traumatic amnesia to deal with, while two sisters have an issue with the younger sister having a suicidal depression with supernatural overtones. And there is a cute mascot dog named Potato who makes cute noises instead of barking. 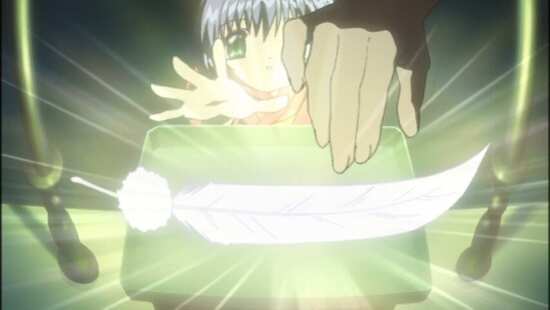 While the side characters are ‘easier’ when it comes to solving their issues, things get a lot harder when it comes to the main character Misuzu, to the point where Yukito realises that the more he tries to help her, the worse things become. So when he leaves, we get a flashback episode or so to give the background to the story, before returning to that main arc. We get highlights to the story from the beginning again, given a new perspective given the flashback, and the addition of a new character to the story; a character that stays around after Yukito leaves. By this point, it’s too late, and a 1000 year old prophecy is coming to pass. Tragedy ensues, and heartstrings are pulled. 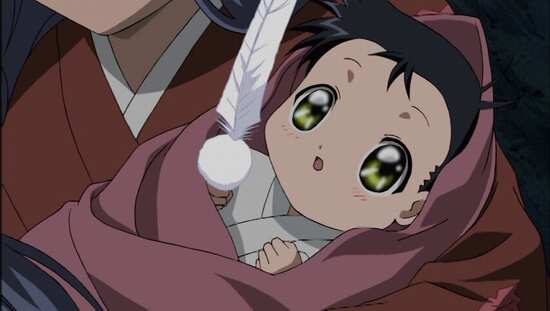 Once again, if you’ve seen a Key Visual story, then the tropes and clichés common to this set of shows will stand out in stark contrast, and I have to admit that rather than watching the show with any devotion at the start, I was ticking off clichés on a mental checklist. It’s a good thing I wasn’t playing a drinking game. But Air really finds its stride in its second half, pulling together a good story, and taking it in a refreshingly tragic direction. The DVDs are showing their age at this point, and it looks like even some basic extras are missing from this set. Just remember to check that you get the corrected disc one.