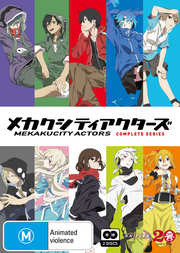 Article
The Summer of Akira is Here! Blu-ray, DVD, Cinema, and TV!

I had pretty much forgotten Mekakucity Actors following its initial streaming back in 2014 on the abortive Anime on Demand site. That’s unsurprising given the ignominious decline of that streaming outlet, the delays and glitches... In fact I can’t even remember if I saw all of the series in the end, or if it got locked behind a paywall before I had the chance. But I do remember that it was a show that was the most Monogotari show without actually being in the Monogatari universe. It shares a production studio in SHAFT, and a director in Akiyuki Shinbo. What I also remember is that I wanted to watch it again, to finish watching it in fact.

The problem is that Mekakucity Actors is an Aniplex title. It’s one of those titles that Aniplex US is sitting on. There’s no physical release of it in the US at all, no DVD or Blu-ray, and certainly no dub. However, just like Aniplex’s Mushi-shi S2, Australia knows a good thing when they see it (plus their internet infrastructure adds weight to physical releases), and Madman Entertainment have released Mekakucity Actors on DVD only. A timely sale, and I finally get to see how the story ends, and indeed after four years, get reminded of how the story begins as well. 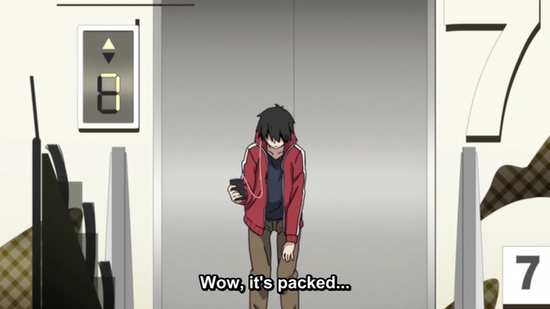 Shintaro Kisaragi is a shut-in, a hikikomori, preferring to interact with the world from the safety of his apartment and from behind a computer screen. Not that he’s short for conversation, as he has the company/annoyance of an AI computer assistant called Ene, who thinks she’s a real girl, and who appeared in Shintaro’s life after he opened an e-mail attachment. Her teasing caused a coke-keyboard accident and required Shintaro leaving the safety of his room to actually go into a mall to buy a new keyboard. And he walked straight into a hostage situation. 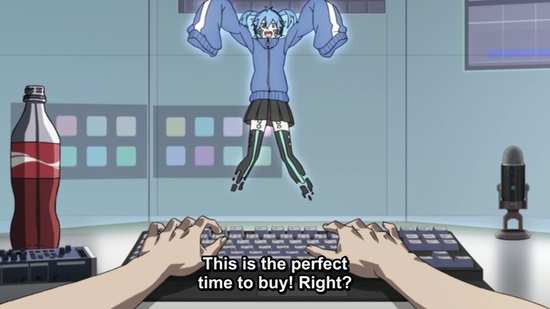 Luckily for him, the Mekakushi-dan (The Blindfold Gang) was there, a group of kids with special powers; they can do strange things with their eyes, and unbeknownst to Shintaro, their newest recruit is his kid sister and famous idol, Momo Kisaragi.

12 episodes of Mekakucity Actors are presented across 2 DVD discs from Madman Entertainment. 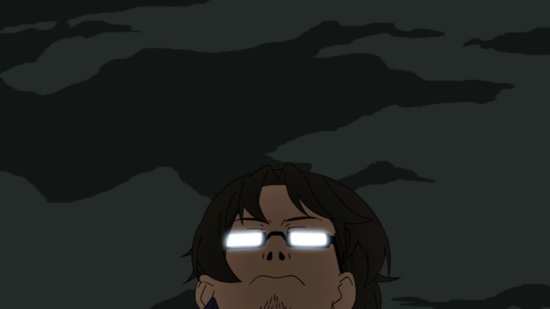 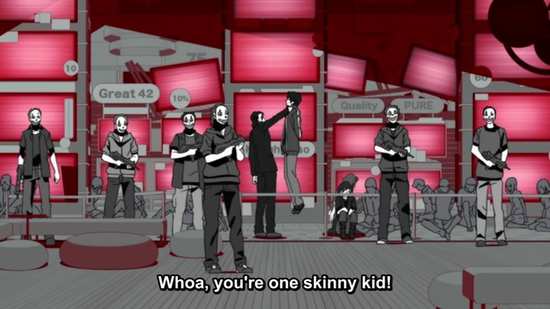 Mekakucity Actors gets a 1.78:1 anamorphic NTSC transfer on these discs. If you’ve seen a Monogatari series, you’ll know exactly what to expect when it comes to character design and world design. These are characters you expect to be hanging around Koyomi Araragi given their general aesthetic, and their tendency to look over their shoulders. The world design is simplistic and stylised, and can be downright surreal when it comes to road signs and traffic lights. In motion the animation is appealing enough, detailed and working well to bring out the characters, emphasise their quirkiness. 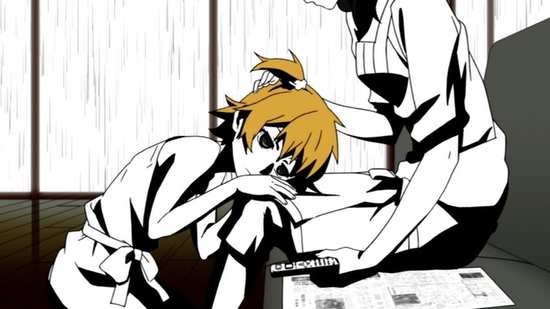 The transfer itself is adequate, bringing across the animation with clarity and strong colour, without too many visible issues with aliasing or the like, although compression is visible around fast motion. The transfer isn’t quite as strong as the transfers that the Monogatari DVDs got via Hanabee and MVM. The subtitles are burnt into the image, and look to be reminiscent of the subtitles the show had whilst streaming. 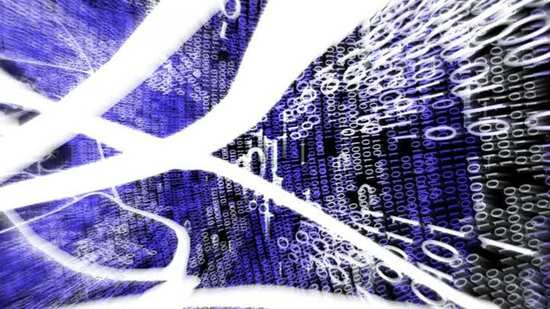 The sole audio track is DD 2.0 Stereo Japanese with English subtitles burnt into the print. The audio is fine, no dropouts and no glitches, and it brings across the dialogue clearly, the action scenes with effect, and the music with clarity. The usual theme songs lack translated lyrics, but the plot-specific songs are all subtitled. The subtitles are timed accurately and free of typos. 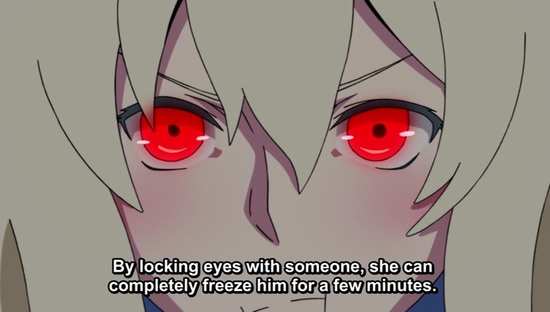 You get 2 discs in an Amaray case, with one held on a central hinged panel. The discs present their content with static menus.

Disc 2 has the extras comprising 3 textless openings, 4 textless closings, a 6:02 End Cards Gallery (next ep previews), and trailers for Samurai Flamenco Part 1, Infinite Stratos 2, Terror in Resonance and Blade Dance of the Elementalers. 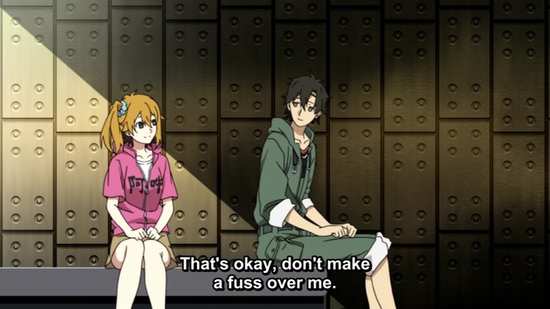 Mekakucity Actors takes you on a bit of a rollercoaster ride over its runtime. Unfortunately, it leaves its peak for the middle of the show, starting off slowly and awkwardly, and tailing off to something of a damp squib of an ending. It really shouldn’t have done, given that it’s a show about teenagers with super-powers. Super powers are still all the rage in modern pop culture, comic book adaptations abound, and ten years after you might have expected society to have moved on, superheroes still fill our multiplexes. So a gang of teens who display special abilities every time their eyes glow red ought to have been compelling stuff. On top of that Mekakucity Actors has a somewhat unique origin, an anime tale inspired by a collection of songs from Kagerou Project. We get stage musicals and movies inspired by the discography of famous groups like Queen and Abba; it was inevitable that anime would do the same thing. 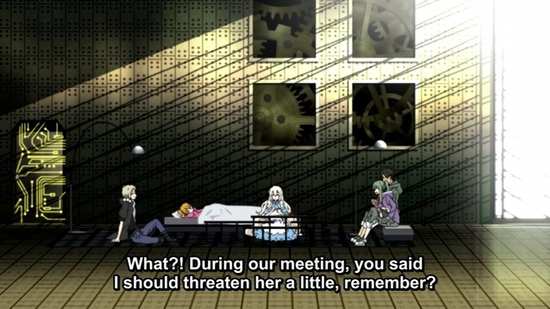 Mekakucity Actors just doesn’t give you an easy way into its story though, offering random snippets of character and narrative across its episodes, with each episode tail-ended by what appears to be an unrelated fairy-tale (much in the same way that Clannad episodes used to end with a story about a girl and her robot). The characters are pretty ephemeral and it’s hard to piece the story together at first. Just who are these kids, how did they get their powers, what is happening in their world? You really have to work at the show to get the most out of it.

It’s around the midway point that the work pays off, that the fractured narrative and non-chronological storytelling, the various plot and character arcs begin to come together and resolve into a whole, and it’s here that you might be tempted to think warmly of Mekakucity Actors, start to think that it might just be a special show indeed. Much of that will be down to the art style and direction. When a show looks like Monogatari, you’d be forgiven for suspecting that the story is of similar quality. 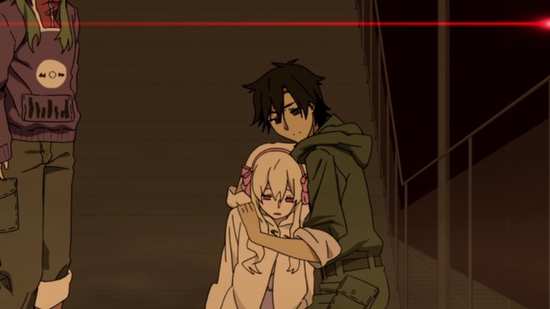 Alas as the show starts tying up its narrative you realise that it’s nothing of the sort. We go from unique superpowers to mysticism and mythology, and the story is tied off with a bow that smells of contrivance and self-satisfaction, the kind of narrative that drives the characters rather than the other way around. It’s a show that began to coalesce when someone asked “Wouldn’t it be cool if...?” and that’s the worst way to tell a story. That way lies fan-fiction and crossovers. The characters in the show just aren’t developed satisfactorily. I still don’t know who exactly was who in the show, and just what their powers might have been. I never cared enough to make a note, so for all the character histrionics and themes of loss, mourning and grief, I wasn’t emotionally affected by this show in any way.

When I watched Mekakucity Actors streamed, I got as far as the interesting bit where the plot coalesced, and the character interrelationships were revealed. That was the good bit. Now that I’ve finally seen how this show ends, it turns out to be a disappointment. Mekakucity Actors is a show that’s wrapped up in just how cool it is. But unwrapping it is like playing pass the parcel, what you’ll find at the end is small and inconsequential.

Thank you for taking your time to write this down! I always wondered why I was so impressed by this series as a kid and questioned it when I tried to rewatch it with another person who hasn't watched it before, who pointed out he finds it boring and confusing. Since as a kid I just found vocaloid cool and the style of the anime, but the plot or the characters didn't really stick around in my memory, since they weren't memorable. There was great potential but it was executed poorly plot and character wise.
After reading your review, I started to understand my own feelings about this anime better. And I couldn't agree more with all the points you made.
posted by bobsyfy cosplay on 8/3/2021 19:01