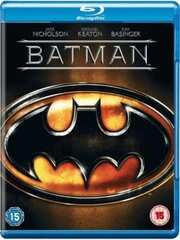 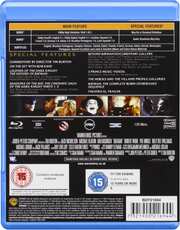 I haven’t done this with any other film franchise, but for some reason I don’t really understand, I’ve avoided the 90s Batman franchise on the strength of the final two films, Batman Forever and Batman and Robin, two of the worst superhero comic book movies I have seen. That would be like me judging the Christopher Reeve Superman movies on the strength of Quest for Peace, or the X-Men movies on the strength of The Last Stand. It’s patently unfair. There is a lot of love for the Michael Keaton Batman movies directed by Tim Burton. Why else would he be reprising the role after thirty years in the forthcoming Flash and Batgirl movies? 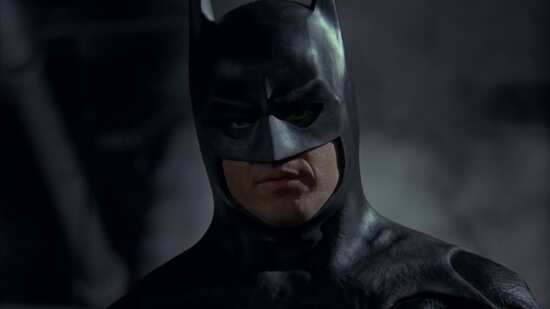 So for the first time in a couple of decades, I found myself in the mood to watch the original (technically not original given the Adam West Batman feature) Batman movie again. And I might have bought the wrong Batman, a film I’ve never actually owned before in any form. I went and bought the original 2008 Blu-ray release for cheap. In 2019, the Batman movies got a long overdue 4k re-master. But the re-mastered Blu-rays never got an individual release; they’re only available bundled with the 4k UHD releases. 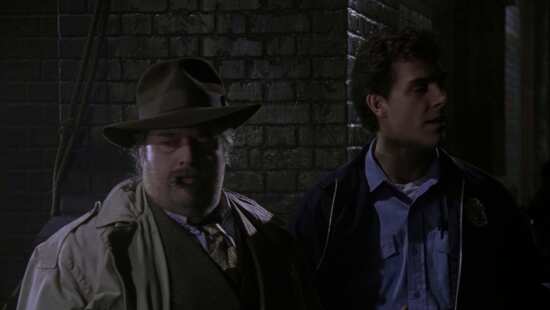 Alexander Knox is a reporter on a mission. There are reports of a giant bat terrorising the criminal fraternity in Gotham City, but no one takes Knox’s crusade to find the Batman seriously. No one except the photojournalist Vicky Vale that is... She thinks the Batman is Pulitzer material, and is willing to team up with Knox. There’s more than enough trouble in the Gotham underworld without the Batman though. Jack Napier has been sleeping with mob boss Carl Grissom’s moll, and Grissom has an ending planned for Napier at the Axis Chemicals factory. Only Batman gets involved, and is pivotal in Napier’s downfall, literally. Napier dies when he falls into a vat of waste chemicals, but that’s also where The Joker is born, and with a grudge against the Bat. And Vicky Vale gets distracted from her hunt for the Batman when she meets billionaire Bruce Wayne. 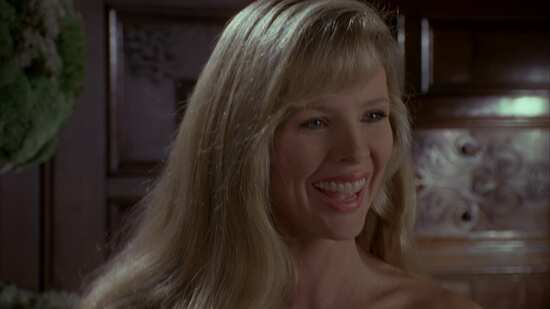 Batman gets a 1.78:1 widescreen 1080p transfer with the choice between Dolby TrueHD 5.1 Surround English, Dolby Digital 5.1 Surround English, Dolby Digital 2.0 Stereo Spanish, French, German, Italian, and Dolby Digital 1.0 Mono Portuguese and Spanish, with subtitles in these languages and Chinese, Danish, Dutch, Finnish, Korean, Norwegian, and Swedish. It looks like I dodged a bullet with the recent re-master. They’ve orange and teal-ed it with new colour timing, and the original sound effects have been replaced with new effects. Better detail and more robust audio means little when you’ve become used to the original 1989 experience. 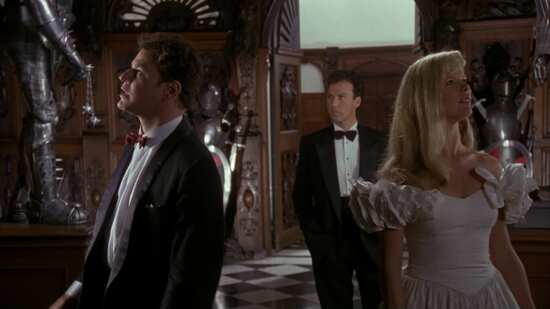 At first glance, Batman doesn’t look too great, with a bit of frame wobble, and a degree of softness. Once the film gets past the opening credits and into the first brightly lit scene, you’ll see that the detail levels are good, and colours are a little subdued. Contrast is good but not great, and some of the darker scenes do lack for detail. But overall, this looks as if they took the DVD master and dumped it onto Blu-ray with little in the way of post-processing. And what you get is a nice, filmic experience with an organic level of film grain throughout, even with this aging VC-1 transfer. Volume levels are a tad low on the disc, which is easily remedied. The surround is adequate, probably the 1989 Stereo source given an up-mix. The dialogue is clear, and the action comes across well. 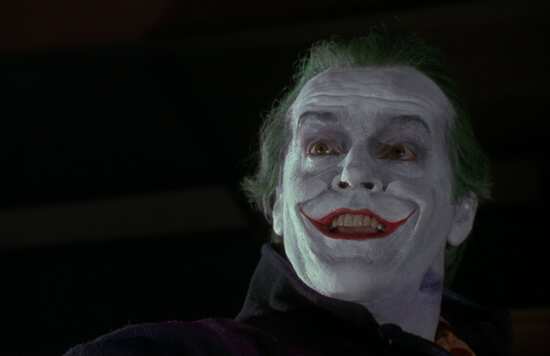 You get one disc in a BD Amaray. The disc autoplays the movie on insertion, defaulting to the English DD 5.1 track; you’ll have to use the pop-up menu to select the TrueHD track. The Top Menu on this disc is merely the extras listing; the Pop-Up menu offers the Scene Select and Audio Options in addition to the extras. The extras all look to be taken from the 2-disc Special Edition DVD.

Commentary by director Tim Burton
On the Set With Bob Kane (2:33)
Legends of the Dark Knight: The History of Batman (40:39) 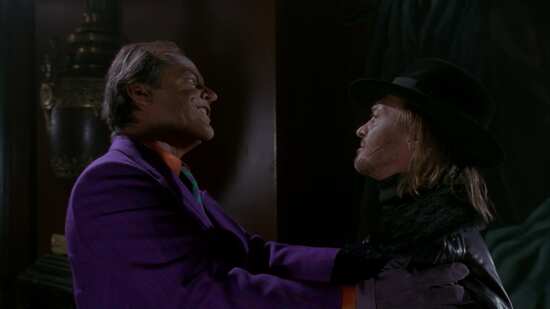 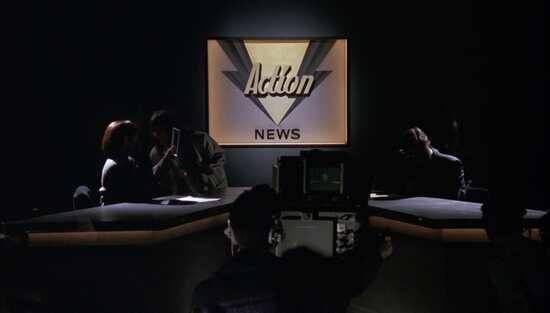 These extras are retrospective in nature, put together some 15 years after the film was released, and as such are a lot more rewarding than the usual EPK guff that new films get. 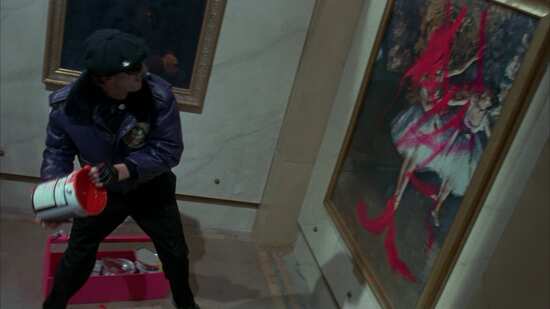 I read, or heard somewhere that the 90s Batman movies weren’t really Batman movies. These were movies where the villains were the stars, and that’s most obvious here where Jack Nicholson got higher billing than Michael Keaton. This really is The Joker’s story, where we follow his journey from his origin to his demise; The Batman is already out there vigilante-ing, his origin is only important insofar as it intersects with the Joker’s story, and about the only character development that he gets is he goes from mysterious vigilante to Gotham’s protector over the course of the film. I’m not too impressed with Batman in this film, donning a batsuit that is more a neck and back brace than anything designed for action. Michael Keaton makes for a much better Bruce Wayne than Batman in this film. I have my problems with the first Batman movie. 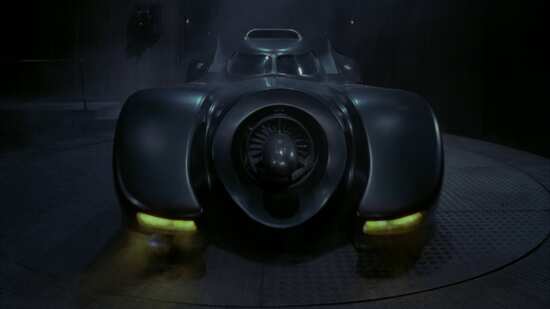 I also find much to appreciate. Compared to what would come when Joel Schumacher got the keys to the franchise, Tim Burton has solid control over his creative vision, creating a Gothic Gotham that looks imposing on film. But that degree of control can only come through a whole lot of studio work and visual effects shots. Compared to the last incarnation of Batman, the Adam West series, Burton went for a lot more realism when it comes to the characters, and you can certainly see that in Bruce Wayne, a far more complex character than had been seen before. Joker too has a sense of realism to him, given we get to see the before and after, the overconfident and self-assured Jack Napier, which justifies the switch into unrestrained psychopathic behaviour following his accident. 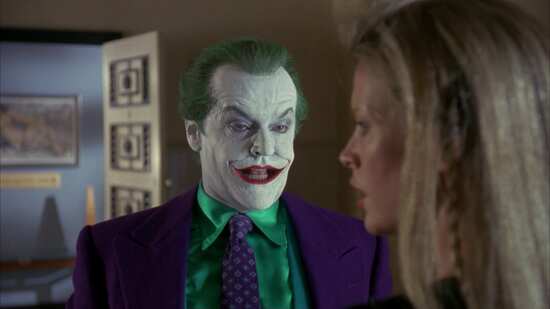 The problem is that the sense of artificial theatricality imposed by the sets, and Tim Burton’s direction, acts against the character realism. This is also probably sacrilege, but I don’t feel that Prince’s music is suited to a Batman movie. I think they got the Batman, pop music mix right with Batman Forever, with Annie Lennox, Seal, and U2. In this film, it’s very obvious to the degree of feeling like a sponsorship deal with Prince. 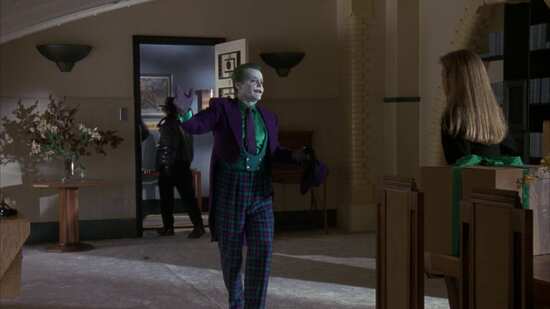 It’s a Joker movie, not a Batman movie. Once you make that cognitive connection, then this film works a lot better. It’s a Jack Nicholson star vehicle, and the fact that the Bruce Wayne story arc is so strong is solely down to Michael Keaton’s performance in the role. Quite frankly, Batman is a disappointment in this film; a restrictive costume limits the action, and makes it harder to take the character seriously as a superhero. Let’s face it, it would be so easy to sneak up on this Batman. Still, I am willing to give Batman Returns another try... eventually. 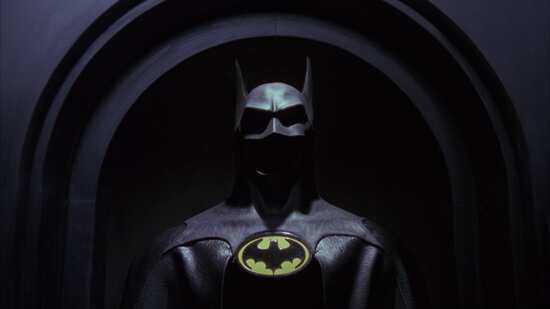 Naturally, you’d want the latest release, with the 4k re-master, but as mentioned, there are issues with that release if you’re a purist that appreciates the film as released in 1989. Initially, this Blu-ray doesn’t look too promising, but the film turns out to have had a pretty decent transfer to begin with, and not too many back catalogue releases from Warner around 2010 look this good.