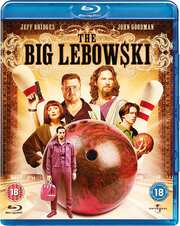 DVD
Big Lebowski, The (US)

DVD
Man Who Wasn`t There, The (UK)

Article
Comedy western Lucky Luke comes to DVD in May

Review for The Big Lebowski

I went for the Special Edition DVD of The Big Lebowski not too long ago, choosing it over the Blu-ray for some daft reason; probably the ‘All new digitally remastered picture’ pasted over the front cover. In the end, I was quite disappointed by that claim, as the resulting DVD was hardly at the cutting edge of that format’s capabilities, even though it was watchable enough, and the meagre extras weren’t worth the “special edition” moniker. This time I got the 2020 Blu-ray release, where Universal celebrates the “most iconic moments in film history”. I can’t go wrong with that, right? 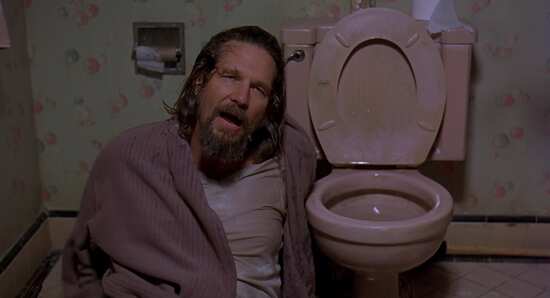 Jeffrey Lebowski is The Dude. Only The Dude isn’t Jeffrey Lebowski. Jeffrey Lebowski is a rich philanthropist who lives in an ornate mansion surrounded by the trophies of his philanthropic works, with his trophy wife Bunnie. The Dude is the The Dude, which is how everyone knows him, and he lives a hippy lifestyle fuelled by weed and bowling that has somehow sustained decades past the summer of love. You can see how this might be confusing, especially for the heavies who kick down the door, demanding money from Jeffrey Lebowski, and pee on The Dude’s rug to make a point. The Dude’s bowling buddy, Vietnam vet Walter points out that the value of his rug should be compensated for by the actual Jeffrey Lebowski, who obviously failed to pay his debts. The actual Jeffrey Lebowski isn’t impressed with The Dude, until his trophy wife Bunnie is kidnapped, and then hires him to pay off the ransom. Walter’s there with some sage advice, suggesting that keeping the million dollar ransom would be more profitable. Then the real Jeff Lebowski gets Bunnie’s toe in the mail... But what about the rug? 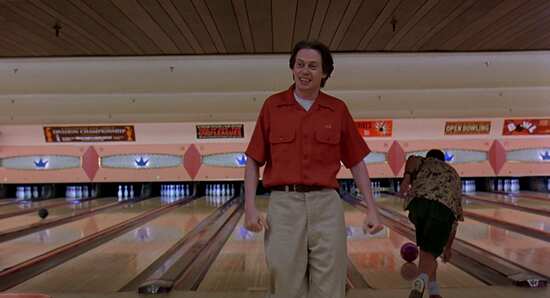 The Big Lebowski gets a 1.85:1 widescreen 1080p transfer on this disc, with the choice between DTS-HD MA 5.1 Surround English, DTS 5.1 Surround French, Italian, German, Spanish, and Japanese, with subtitles in these languages plus, Cantonese, Danish, Dutch, Finnish, Icelandic, Korean, Norwegian, Portuguese, Swedish, and Mandarin, all locked during playback. The image quality is adequate at best, on a par with what I was hoping for from that Special Edition DVD and didn’t get. The image is clear, colours are consistent and detail levels are fair. The image lacks the HD crispness that you would expect and hope for on a Blu-ray, and I suspect that Universal simply used the same master that they’ve always used for The Big Lebowski, putting it through their usual DNR and edge enhancement back catalogue production line. Audio is fine though, really served well by the lossless upgrade, keeping the dialogue clear while really making the most of that eclectic music soundtrack. 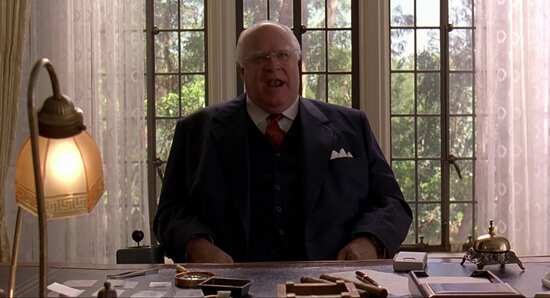 The o-card slipcover was printed in 2020. The Blu-ray Amaray and the disc within is the same old one pressed in 2011. So much for that idea!

The disc boots to an animated menu following an antipiracy thank you. 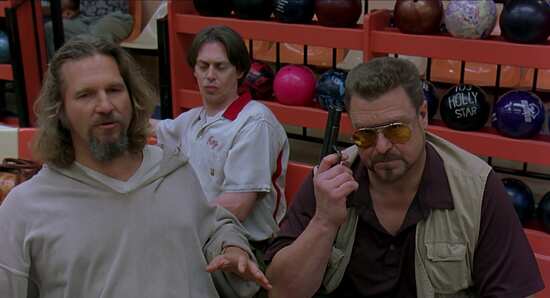 Familiar from the DVD are the following extras... 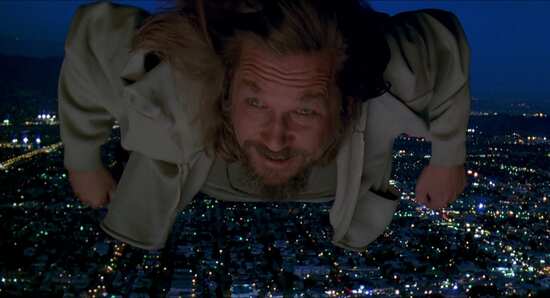 Taken from other DVD releases are these SD extras...

The Lebowski Fest: An Achiever’s Story (13:53)
Flying Carpets and Bowling Pin Dreams: The Dream Sequences of The Dude (4:20)
Interactive Map 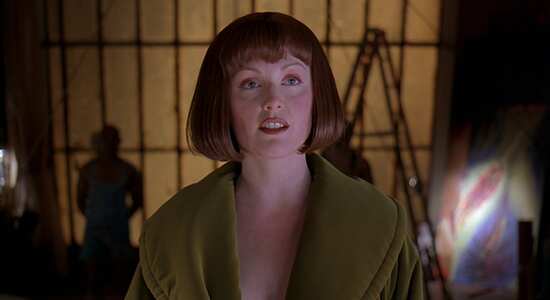 Created for the film’s HD release...

The U-Control offers you the choice of Scene Companion, The Music of The Big Lebowski, and Mark, It Dude pop-ups during playback. 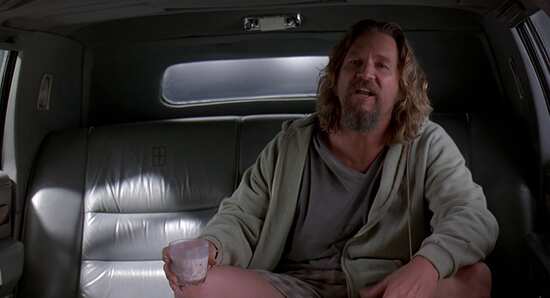 It’s such a weird idea, make a film noir style detective thriller, but with a slacker in the main role. It shouldn’t work, but it somehow makes The Big Lebowski one of my favourite comedies. It’s the rare film that has me actually laughing out loud these days, especially when I watch them by myself, but The Big Lebowski is hilarious. The Dude is an amazing, unlikely hero, provoked by peer pressure into trying to get compensation for his defiled rug, and winding up in the middle of a Chandler-esque mystery as a result. 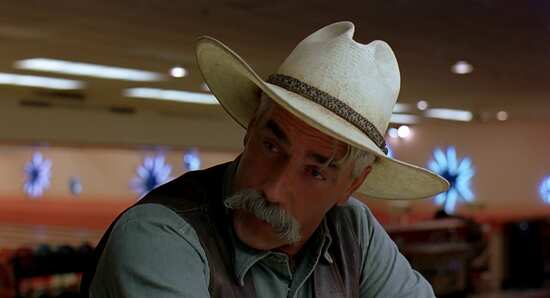 The joy of the film is in its characters, so richly painted and larger than life, and a cast that brings those characters alive in such engaging ways. The Dude and Walter is an unlikely pair of friends, the hippy and the war veteran, with The Dude’s easygoing nature always shredded by the sheer bull-headed idiocy of Walter, yet somehow always going along with his half-baked plans and over the top rhetoric anyway. Steve Buscemi is almost cast against type as the third member of their bowling team Donny, who can never get a word in edgeways. But it’s John Goodman who fills the screen as Walter, every utterance eminently quotable. It’s probably the bowling theme, but I can’t help seeing this as an R-Rated Flintstones, Fred and Barney to the extreme. 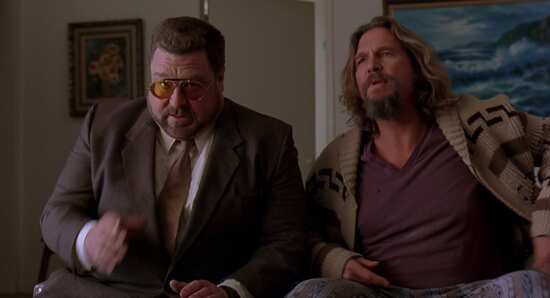 The Dude goes on a journey in this film, starting off with his desire to see justice for his rug, and then getting pulled further and further into the Bunnie Lebowski kidnapping mystery, which reveals all manner of colourful characters invested in the case. Whether it’s the wheelchair bound Jeffrey Lebowski and his sycophantic assistant Brandt, Lebowski’s bohemian daughter Maude, rival bowling ace and pederast Jesus Quintana, the German nihilists, the adult entertainment mogul, and of course you can’t have a film noir without a guy in an iron lung! Every scene is a delight, every moment delivering unexpected laughs. And of course you have the most incongruous Western narration from The Stranger, but which turns out to be wholly appropriate to the film. 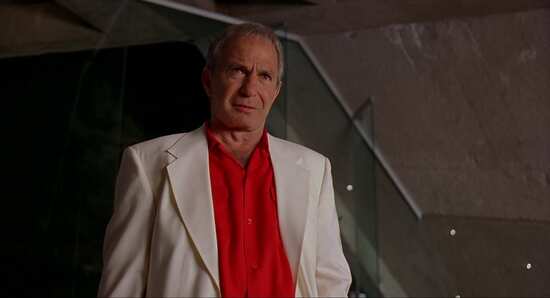 The Big Lebowski is a film perfect for re-watching, a film that epitomises the creativity and adventure there was in cinema during the 1990s which seems somehow to have diminished in recent Hollywood output. It’s the unlikeliest feel-good movie you’d expect, but it does make you feel good, knowing that The Dude is out there, somewhere. 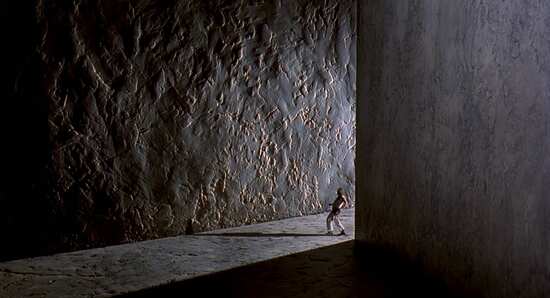 Once again, I got the wrong Lebowski. What I really wanted was a UHD player, and the 4k disc of the film, released in 2018, where Universal actually did a decent job in presenting the film as it deserves to be seen. It’s not even worth getting that UHD for the bonus Blu-ray, as that is still this decrepit 2011 disc. The Big Lebowski Blu-ray is only worth the double dip if you want better audio and more extra features. The image certainly isn’t worth it.