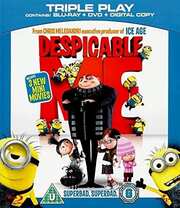 Review for Despicable Me

I’m on the cutting edge as always when it comes to popular entertainment. Over ten years after the Minions were meme-ing all over the place, I finally take a look at the film which kicked off that phenomenon, Despicable Me. Not being a fan of modern family animation from Hollywood, I’ve tended to avoid such material as a matter of course, but when the movies were in a bargain bucket, it was hard to resist finding out whether the Minions are the scene stealers that they are reputed to be. 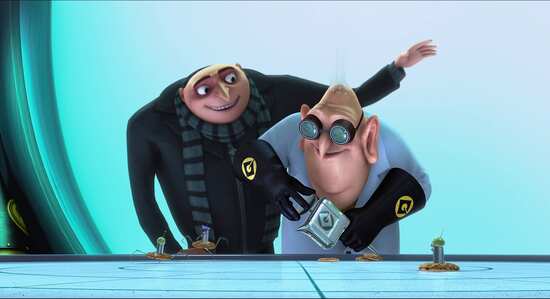 Someone has stolen the great Pyramid at Giza. That’s the kind of thing that affects the reputation of super-villain Gru, who with his minions, and his mad scientist Nefario is known for his epic schemes. Someone is stealing his thunder, and he has a plan to get back on top spot. He needs to steal a shrink ray, get a loan from an evil bank to build a rocket, and steal nothing less than the moon itself. The problem is that the pyramid thief gets to the shrink ray first, and locks it up so tight that Gru can’t get to it. 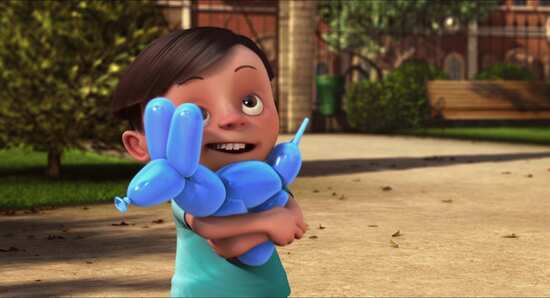 But little orphan girls can, as Gru notices when a trio show up, selling cookies. Gru has a new plan... adopt the girls, and send them in with robotic cookies to crack open the security. It’s just that Gru didn’t anticipate one thing... the whole being a dad part of the plan. 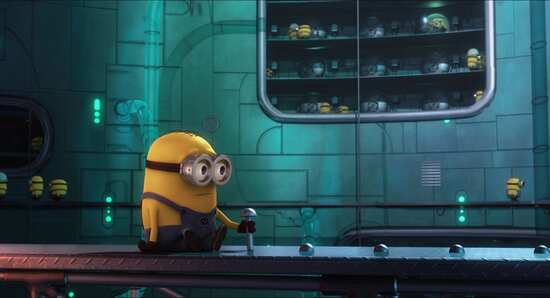 A 1.85:1 widescreen 1080p transfer with the choice of DTS-HD MA 5.1 Surround English, DD 2.0 Stereo English Audio Descriptive, and DTS 5.1 French, Italian, German, Spanish, Portuguese, Icelandic and Turkish, with subtitles in these languages and Arabic are the disc specs. And I found nothing to complain about with a pixel perfect transfer of a digital animation, supported by an immersive surround track that hits all the right notes when it comes to action, music and keeping the dialogue clear. It all serves to bring across the imaginative animation, the idiosyncratic character designs, and great sense of humour. 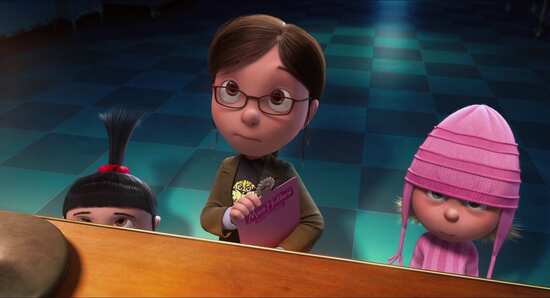 You can tell how old this release is by the format. It’s a triple play release, with three discs. You get the film on Blu-ray, and on DVD, while the third DVD disc is the digital copy of the film, no downloading required. It’s a standard BD Amaray with two discs on a centrally hinged panel.

After an anti-piracy thank you, and a trailer for Hop, the disc boots to an animated menu. 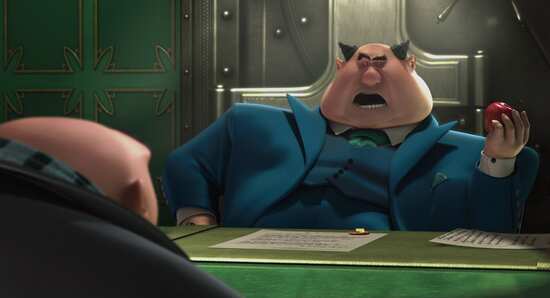 The following extras are accessible.

Gru-Control works on the English version of the film, and adds more Minion silliness popping out of the main feature.

There are three Despicable Me mini movies offering more fun with the, you’ve guessed it, Minions. These run to 8:22 in total. 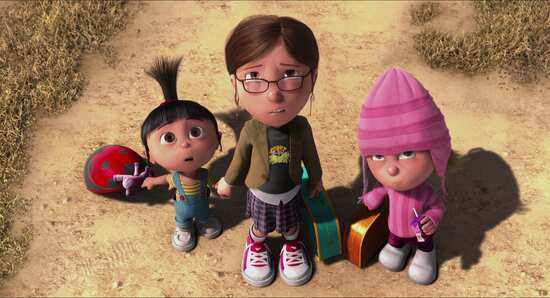 ... are the grown up featurettes that go with the movie. 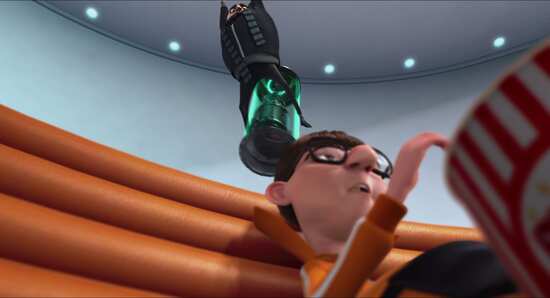 For the younger viewers there are three games in Super Silly Fun Land, another in Gru’s Rocket Builder and there are 5 of Miss Hattie’s Top Secret Cookie Recipes.

Finally there are two previews for Despicable Me games. 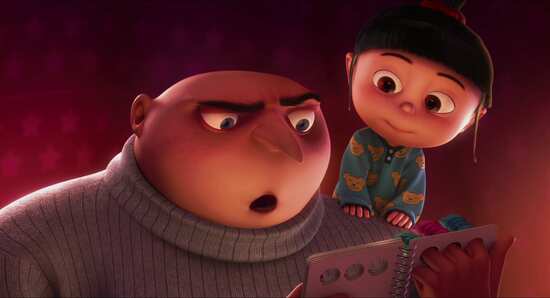 The cynic in me, the jaded guy who still occasionally watches these family films and sees the seams where they are put together, can sense the committee at work on the scripts, can sense the fine tuned engineering that goes into crafting the characters and getting the emotional beats spot on, the placement of jokes, and the clever casting that appeals to viewers young and old, and of course the merchandising tie-in characters that break out of the film and take over the world, that guy... He shut up for ninety minutes last night and let me just enjoy the film. Now that the end credits have rolled, he’s back making noise again. I’m going to try to ignore him for the remainder of this review, and I suggest you do too, if he tries to venture an opinion. 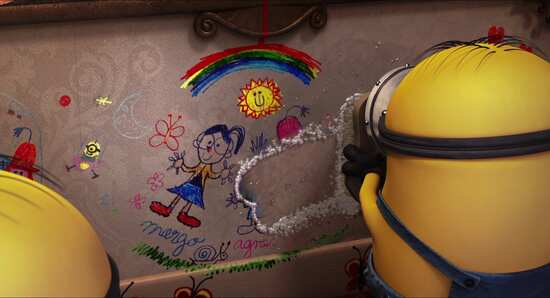 Despicable Me is fun. The creators have crafted a world where supervillains are really just nice guys with megalomaniac dreams, wanting to show off with the audacity of their otherwise harmless crimes. About the worst thing that you can say about Gru is that he’s antisocial. This has to be the case of course, where his plans demand that he becomes the guardian to a group of children. Too, the orphans Margo, Agnes and Edith come from one of those ‘nasty’ orphanages where the administrator is a bit mean; all the more impetus for them to consider the home of a villain to be an improvement. 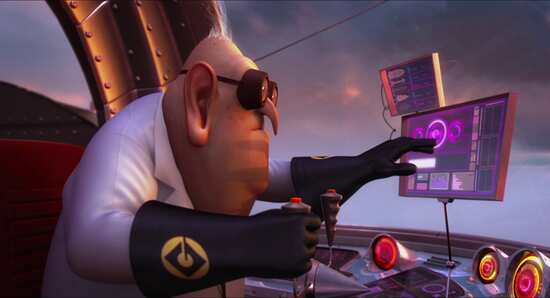 Gru’s single-minded in his plan, sees the girls as a means to an end, and at first really just puts them in a corner and expects them to be quiet. But as the story unfolds, they get under his skin, and into his heart, and things start to change (I can feel my inner cynic already struggling against his bonds). In the end, he has to choose between the girls, and his villainous dreams, and in the last minute twist he makes the wrong choice. But it wouldn’t be much of a movie if he didn’t get a chance to redeem himself. 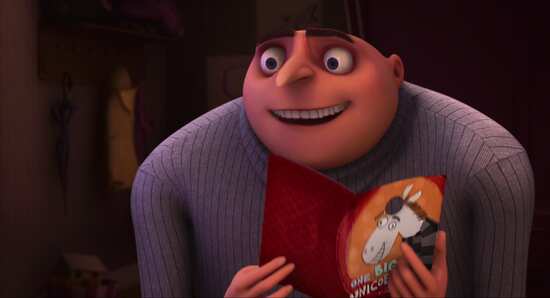 The animation is splendid, the sheer imagination on show when it comes to the set pieces, and the visual gags is up there with the best of them, while the characters are fun, and the sense of humour is spot on. And quite deservedly, the Minions steal every scene that they are in. I’ll probably be fighting with my inner cynic on most movies like this, but as long as he shuts up while I watch them, then they are well worth having. The Blu-ray may be an old one at this point, but it still holds up really well.