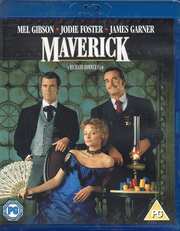 DVD
Goonies, The (US)
Related Articles

Article
Comedy western Lucky Luke comes to DVD in May

Article
The Great Escape out on Blu-ray this June

Article
Golden oldies from Odeon Entertainment out in October on DVD

It’s purely coincidence that I double dipped a couple of Richard Donner movies to Blu-ray, the week before he died, but it does make re-watching the films at this point a somewhat poignant affair. With the Lethal Weapon franchise, he came to be known as an action movie director, but the fact is that he was proficient at anything he turned his hand to, making solid movies even out of mediocre scripts, and genuine classics out of the good ones. He’s given us comedies like Scrooged, kids’ adventures like The Goonies; he’s even made us believe that a man can fly. My favourite Richard Donner movie is the mediaeval fantasy action romance, Ladyhawke. In 1994, he made a comedy Western, bringing a TV classic to the big screen in Maverick. He’s so prolific a director that it is conceivable that he directed a few episodes of the original TV series, but according to IMDB, that wasn’t so. There are three episodes of Wild, Wild West on his resume though, although the less said about that feature film adaptation, the better.

Bret Maverick has a poker game to get to, the poker game, with a healthy half a million dollars grand prize. That does mean he needs a $25,000 entry fee, and he’s still $3000 short. He’s calling in old debts all over the place, but luck isn’t going his way, certainly not with the travelling companions he’s picked up. Annabelle Bransford plays poker with the best of them, when she isn’t lifting wallets, and it’s annoyance at first sight, while lawman, Zane Cooper has a strange way of ‘helping’ Maverick in tricky situations. There are plenty of those situations on the way to the game, as there are some who don’t want Maverick at that big table.

Maverick gets a 2.40:1 widescreen 1080p transfer, and you have the choice of DTS-HD MA 2.0 Stereo English, DD 2.0 Stereo French, and DD 2.0 Mono Portuguese, with subtitles in these languages and Spanish. The transfer is an astounding improvement over the single layer DVD that we previously had in the UK, but as a Blu-ray it’s fair at best. The image is clear, the print is clean, and you get the proper Western feel when it comes to sets and locations. Dark detail too is good, but there is an overall softness to the transfer, and a sense of static grain that points to just a little too much post-processing of an old transfer to make it HD ready. The stereo is adequate, the action comes across well enough, the dialogue (when Bret isn’t babbling) is clear, and the music is suitably Western-y. The volume levels are a little low though.

You get one disc in a BD Amaray, and finally we get extra features in the UK. The disc boots to a static menu, where you will find...

A Pictorial History of the Makin’ of the Movie Maverick (28:43)
Amazing Grace Music Video of the Maverick Choir (3:14)
Theatrical Trailer (2:35)

This pretty much amounts to the old US DVD extras warmed over, but they’re better than nothing.

I wouldn’t call Maverick a great movie, but it is an enjoyable romp. It’s a cast and crew, getting together to have a good time for a couple of months, and even if the audience has just half the fun that they apparently had, it’s more than enough to carry the movie. Maverick and his ‘friends’ con and finagle their way through the adventure, with plenty of double-crosses and swindles to partake of. The director and editor tend to indulge themselves with the characters and their interactions in each new scene to the detriment of the pace and energy of the film, but you don’t care, as it’s just too much fun. You can afford to do that with a plot as flimsy as this one. There’s not much of a skeleton when it’s all about Maverick trying to get to a poker game, so you just wind up stacking as much meat as you can, hoping that it forms something that looks vaguely humanoid. That’s a gross metaphor when I stop to think about it, but Maverick makes for a pretty decent looking meat-man.

It all hinges on the characters, and in this film they are a delight, with a pre-troubles Mel Gibson charming as the title character, and there’s oodles of chemistry with co-star Jodie Foster. It’s also something of a coup to get the original Maverick, James Garner as the lawman Cooper here, and it makes for a great triangle. The dialogue just zings with energy all the way through.

The casting really is the big draw to this film, with Donner bringing a load of his friends on the film, with familiar names and faces like Margot Kidder, Steve Kahan, and Danny Glover making appearances. But also made at the start of the nineties, there was still enough genuine classic Western talent to fill the screen, not least with James Coburn playing a prominent role. But you’ll also recognise faces like Denver Pyle, Doug McClure, Henry Darrow, William Marshall, and William Smith and many more veterans of TV and movie Westerns of the sixties and seventies. In many ways, Maverick is more a celebration of the classic Western than something like Unforgiven.