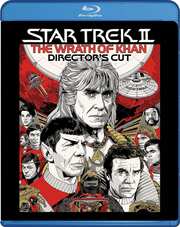 DVD
Star Trek II: The Wrath Of Khan (US)

Review for Star Trek 2 - The Wrath Of Khan (Director's Cut)

I think I have to resign myself to the inevitable. If they release this film in any format, I will eventually buy it. That seems rather redundant at this point as I have probably seen The Wrath of Khan more than any other film, although most of that was 30-odd years ago. My family had just bought a VCR, and one of the films that I taped on the three blank VHS tapes that came with the machine was Star Trek II. Given the novelty of that, I re-watched the film until I had it memorised. The other two were Chisum and The Looney, Looney, Looney Bugs Bunny Movie if you’re wondering. Given that much familiarity with the film there was never any pressing reason to buy it at retail, but three VHS tapes, two DVD releases, and the Star Trek movie collection Blu-ray later, here I am, watching yet another Blu-ray version. I wasn’t going to get The Director’s Cut Blu-ray, despite the newer 4k restoration, as I prefer the Theatrical Version to the point that I watch it exclusively, but the die was cast when I learned that this release has both versions present via seamless branching.

It’s the 23rd Century, and Kirk has been made a deskbound Admiral, again! He’s in the midst of a midlife crisis, as his friends try in vain to cheer him up. But still, there is the opportunity to go back aboard the Enterprise, now a training ship half-filled with cadets, to go on a quick jaunt around the galaxy. However, trouble looms as the starship Reliant, which has been searching for a suitable planet to conduct a terraforming experiment, has happened upon the survivors of a group of genetically engineered supermen. Khan, a warrior from the 20th Century had originally been defeated by Kirk, and exiled to a barren planet. The intervening years haven’t been kind, and now the psychopathic superman has taken the Reliant and the ultimate weapon, developed by Kirk’s estranged son, and is now looking to lay a little vengeance on Kirk.

The Wrath of Khan got a 4k restoration for this release, although there has been no UHD at this time. The image is clear and sharp, with excellent detail, good contrast and no signs of age or print damage. Star Trek II was the best disc in the original Blu-ray collection release, as it got off lighter than the other films when it came to post-processing and DNR, but even that looks nowhere near as filmic as this Director’s Cut Blu-ray. That original Blu-ray had its issues with colour, with a whole lot of saturated reds and blues. The Director’s Cut Blu-ray overcompensates to some degree, really dialling the reds down, making the maroon uniforms feel almost brownish purple in some scenes. But generally the colour balance when it comes to those blues, and especially the skin tones are closer to natural on this disc, although not as natural as that old DVD release I have of this film. I was really impressed once more as to just how good the special effects are in this film, probably still the best of any of the original series Trek movies, and I was seeing detail in the Genesis Cave that I had never seen before. But I have seen it stated on some forums, that the 4k streaming version of the film actually looks better than this disc, what with the HDR and all.

You have the choice between Dolby True-HD 7.1 Surround English, Dolby Digital 2.0 Surround French, and Dolby Digital 2.0 Mono Spanish and Portuguese, with subtitles in these languages. I definitely appreciated the audio more on this disc than I did on the original Blu-ray release. The small nitpick I have about obvious ADR in some scenes is still apparent, but the surround audio sounds a lot more balanced and immersive, feeling less like a stereo upmix. The action comes across well, and I really love how James Horner’s score comes across on this disc. The dialogue is clear throughout.

You get one disc in a BD Amaray, with perhaps the worst, pseudo comic book art you’ll have ever seen on a sleeve. The disc boots to an animated menu, and you’ll find the following extras.

The Genesis Effect: Engineering The Wrath of Khan (28:21) is a making of retrospective new to this release.

In The Star Trek Universe you’ll find the following featurettes.

Farewell: A Tribute to Ricardo Montalban (4:43)

There are 13 sets of Storyboards from the film, and the Theatrical Trailer (2:21)

I wish this case had a reversible sleeve.

It’s been almost 40 years, and I still love Star Trek II: The Wrath of Khan. It is an amazing space opera, an exciting adventure movie that still holds up well today. You have the original series cast in their prime, one of the most memorable screen villains in Khan, and a perfectly pitched revenge story, with meaning and growth to the characters, all paced to perfection. It is the best of the Star Trek movies, hasn’t aged a day, and is unaffected by so many of the subsequent sequels, reboots and remakes trying in vain to recapture that magic.

It doesn’t need the director’s cut, although I suppose it’s nice to have something I have no intention of ever watching again. It’s all nice character moments to be sure, but is really just unnecessary padding, although apparently slightly less padded than the Director’s Cut on DVD. I’ve read that the scene after the Genesis Cave, when they beam back to the Enterprise, and Spock and Kirk are chatting in the Jeffries’ Tube is missing on the Blu-ray.

It’s still not perfect though, preventing me from awarding the disc the 10/10 that the film it contains deserves. The first release of the film on Blu-ray was pretty good, a solid effort in a collection where the rest of the Original Series movies were marred by excessive DNR, to the point where the Enterprise was sponsored by Madame Tussauds. The original Wrath of Khan Blu-ray may have avoided the DNR, but its flaw was that it pushed the colour saturation to excess. This release fixes that issue, and then some, toning down the reds a little too far. The film looks better than ever before on this disc in terms of clarity and contrast, it sounds pretty good as well, but when it comes to the film’s colour timing, that first DVD release that I bought way back when, is closer to how I’ve always remembered the film looking.