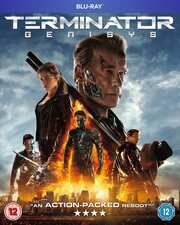 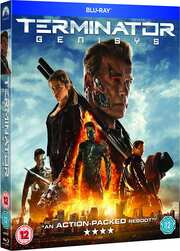 Blu-ray
Teenage Mutant Ninja Turtles: Out of the Shadows

I must be a glutton for punishment. It hasn’t been that long since I’ve been disappointed by the most recent Terminator – Dark Fate, and I have a hankering to watch a Terminator film which is better than that, and maybe even a satisfying watch. I then went on a spending spree in my local pound shop, which seems to be a repository of mediocre Terminator movies, and I filled in two of the three remaining gaps in my collection of the Terminator franchise. I still haven’t been able to work up the courage to spend money on Terminator 3: Rise of the Machines. Once in the cinema was enough for that travesty, but I did pick up Terminator Salvation, and Terminator Genisys, two movies that failed to spin off franchises of their own as was the intention. It seems that no film since has recaptured the magic of the original Terminator and T2 Judgment Day, so all I can really hope for is a guilty pleasure, a film that is so bad that it’s good. I didn’t even get that much with Terminator – Dark Fate.

John Connor leads the war against the machines, and the humans are winning, following the apocalypse of Judgement Day, and the fight for survival against the Terminators intent on the extinction of mankind. Yet while the battle against Skynet is about to come to its conclusion, John Connor leads a select group, and his right hand man Kyle Reese against a seemingly innocuous target. But this target is secretly Skynet’s final weapon, a time machine. They get there too late; Skynet has already sent an infiltrator unit back to 1984, in order to kill Sarah Connor before her son, John Connor can even be born. It’s time for Kyle Reese to step into the device, but as the machine spins up, the last thing Reese sees is someone attacking John Connor.

He arrives in 1984 with two conflicting sets of memories; but this isn’t the 1984 he was expecting to go to. Connor told him that Sarah in this time was an innocent waitress, with no idea of the fate that awaits her. But his arrival is first noticed by a T1000, shape-shifting Terminator, and he’s rescued by a tooled up Sarah Connor, assisted by an aged T800 Terminator she affectionately calls “Pops”. Not only has history changed, but the future has as well. Judgment Day no longer happens in 1997. But they have a chance to stop it happening in San Francisco of 2017. They only have to get there...

Terminator Gensisys gets a 2.39:1 widescreen 1080p transfer with Dolby Atmos English, and DD 5.1 Surround French, German, Italian, Japanese, Spanish and English Audio Descriptive with subtitles in these languages and Danish, Dutch, Finnish, Norwegian and Swedish. It’s a nigh on pixel perfect transfer of a recent film, clear and sharp with consistent colours, no problems with compression or the like. The audio is excellent, with great music, immersive action, while keeping the dialogue clear. One thing I did notice is the prevalence of the bass drop in the film, which I usually associate with trailers only. Another thing is the quality of the special effects, which aside from the youthified Arnie, are actually better accomplished than in Dark Fate. Certainly the action has weight and impact in a way that it didn’t have in the most recent attempt.

You get one disc in a BD Amaray, which boots to an animated menu. The following extras are on the disc.

Three featurettes that offer actor interviews, a look behind the scenes of the shoot, and the special effects, are a pretty rounded, if brief selection. They might be a bit disappointing, if like me you’ve really tired of green-screen.

Well, that’s a turn up for the books. I enjoyed Terminator Genisys, certainly a lot more than the few times I’ve caught it on TV (I really hate adverts). I can see why Terminator fans didn’t take to it though, as Terminator Genisys tries to do something new with a franchise that has been a formulaic chase movie from the off. However, originality is a qualified term when you realise that Terminator Genisys is really only bringing a new version of The Sarah Connor Chronicles TV series to the screen. Skydance, who produced the film have form with retcons and reboots though, given that they effectively restarted Star Trek with their Kelvinverse offshoot. They do the same thing here with Terminator, trying to establish a far more convoluted universe with a more complex back story. It does involve writing off the original Terminator and T2 from the continuity, which is probably the straw that broke the camel’s back for Terminator fans.

There are plenty of minor nits for fans to pick at. They probably hated the idea of the ultimate villain of the piece, which completely subverts the story that we’ve been living with from the beginning. Arnie’s cyborg is still the comic relief, and that creepy grin that was originally edited out of T2 makes more than one appearance here, and you might wish that it didn’t. Then there is the idea of a Kyle Reese that grew up in a post-apocalyptic world, apparently with plenty to eat, and a gym to work out in before stepping into a time machine.

It is 12 rated, and it’s an action movie without much in the way of blood and gore, something that hasn’t really been seen since the 1984 original, but it’s paced well, and it has some really good stunts and action sequences to appreciate. It has plenty of cool touches and references to the first two films, but given that this film effectively erases that continuity, you might feel it’s more rubbing salt in the wound rather than paying homage. The film also tries to keep up with modern technology and society. The original film merely had a computer named Skynet taking over the world. T2 elaborated with a neural net machine that people had put in charge of the nuclear arsenal. T3 changed it to software, proliferating through the Internet, and Genisys shifts the whole thing to our modern obsession with social media and the Internet of things, making Skynet an all encompassing app, and Cyberdyne the equivalent of Apple or Facebook.

Recasting Sarah Connor and Kyle Reese, and effectively rebooting the franchise with a greater emphasis on the time travel aspects of the story, was a good idea. It’s moving away from the chase movie aspects of the formula, making things more complex and interesting. It’s making more of the Time War idea, which adds dimension. But it does mean undoing those Terminator movies that the fans hold most dear, something you can really only do if you hit it for six, and Terminator Genisys has too many flaws to do that. It’s also neutered by the modern film industry desire to play to broad audiences, and Terminator Genisys is more comic book than action movie.

Seeing past all that though, Terminator Genisys did establish an interesting universe, and built on some compelling ideas. When I finished with Dark Fate, I felt that the old nag should be taken to the back of the barn and put out of its misery. Genisys, despite its annoyances delivered a new take on the world that I wouldn’t have been averse to seeing more of. Terminator Genisys is enjoyable fun, it is that guilty pleasure that I was looking for, and it gets a solid Blu-ray release from Paramount.