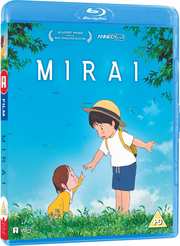 Blu-ray
The Boy and the Beast

9, 10, 9, 9, and 8, the scores I’ve given to the Mamoru Hosoda movies I have seen in the order that they were made. One of the best One Piece spin off features was Baron Omatsuri and the Secret Island, but when his The Girl Who Leapt Through Time was released, it was the perfect movie to me. Summer Wars was almost as good, but was a little more niche in the audience that it targeted. Wolf Children’s another good film, but it had a flaw or two in its storytelling, and most recently I reviewed The Boy and The Beast to find a great, watchable film, but lacking in emotional relevance; Hosoda’s weakest yet. It’s all relative of course, but the trend has been obvious, a downward slide ever since The Girl Who Leapt Through Time. So for the first time, with Mirai, I wasn’t looking forward to a Mamoru Hosoda movie. That’s despite it being the first Mamoru Hosoda movie to be nominated for an Oscar. 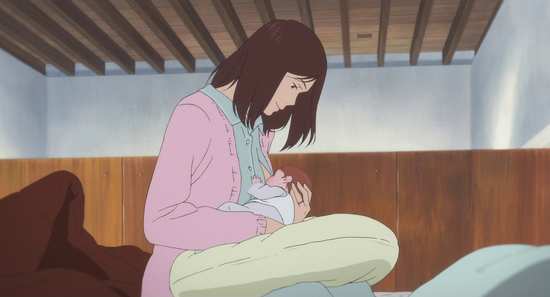 4-year-old Kun was the apple of his parents’ eye, the centre of attention and recipient of all the love they could muster. That was until the day his mother come home from the hospital with a little baby sister, Mirai. Now all of a sudden, he’s second best in the family, his parents are doting on his little sister, and he’s supposed to be a big brother and protect her. It isn’t long before the tantrums begin, and the jealousy explodes. That is to be expected. What isn’t expected is that one day, a grown up Mirai appears in the garden, asking her ‘big’ brother for a favour. It’s the start of an adventure that will help Kun find his place in the family again. 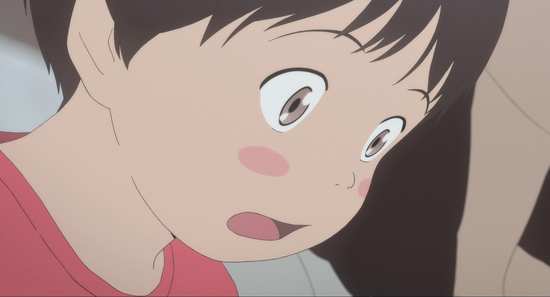 Mirai gets a 1.85:1 widescreen 1080p transfer on this disc. The image is clear and sharp, colours are consistent, and detail levels are excellent. In terms of character and world design, this is probably the most intricate and detailed Hosoda film yet. There is no sign of banding, but there is a fish shoal sequence in the film which is so dynamic and complex that I kept waiting for the picture to break up into compression artefacts. It seems to skate the edge of that, but it’s one scene that I’d hate to watch on DVD. Also of note is Kun’s family home, designed by his architect father, with its central courtyard and an ‘oak’ tree that is pivotal to the story. It looks like a house from Grand Designs, and I kept expecting an anime Kevin McCloud to show up. 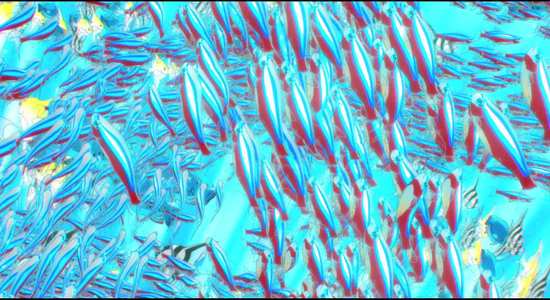 You have the choice between DTS-HD MA 5.1 Surround English and Japanese with optional English subtitles. There is no signs only track, which is an oversight when it comes to theme song lyrics and the like for the English audio track. The film’s surround is really effective and immersive; the dialogue remains clear throughout, the subtitles timed accurately and free of typos. I was really impressed with the music, which is unexpected yet delightfully appropriate to the story. 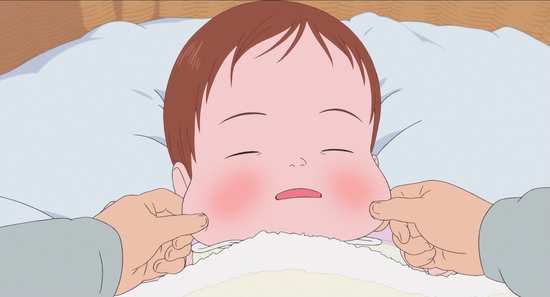 Once again a Mamoru Hosoda feature film is bereft of meaningful extra features. I think Wolf Children was the last one to get some on disc goodness, and it’s been declining since that gorgeous 2-disc DVD for The Girl Who Leapt Through Time. 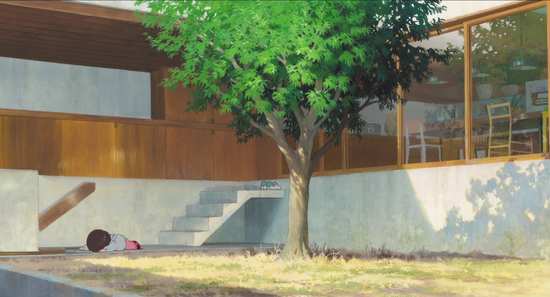 On this disc, you get an animated menu, and two trailers.

I haven’t seen the Collector’s Edition, but apparently you get a 40 page booklet on the making of the film, and the soundtrack CD, which makes up for it somewhat. There are also some artcards and a poster. 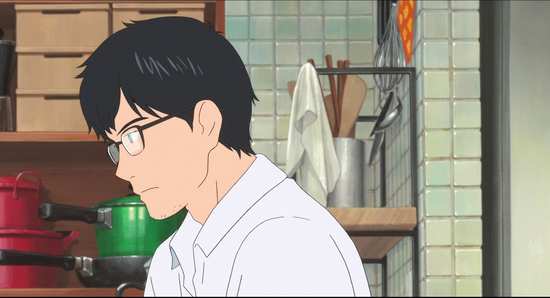 Two things came to mind while watching Mirai, Back to the Future and Level 42’s Running in the Family. DeLoreans, Flux Capacitors, mad scientists, time travel and paradoxes aside, the initial premise behind Back to the Future was to get a teenager, frustrated at his stodgy parents’ lack of dreams and hope, to meet them when they were the same age as him, and to see the similarities... Mirai focuses on that core message, through the medium of a wondrous childhood fantasy tale. It’s one of the best films I have seen from Mamoru Hosoda in years, perhaps since The Girl Who Leapt Through Time. 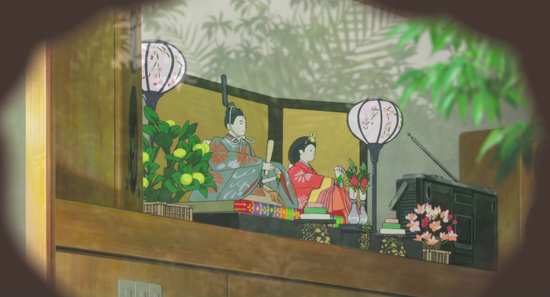 It does take elements of that and Wolf Children when it comes to its ideas and one of its animation sequences. But Mirai is a universal story that plays to broad audiences. After all what can be more universal than the idea of the jealousy that arises when a new sibling comes into the family. Kun’s conflicted feelings are easy to understand and empathise with, his love and fascination for a new baby in the family against the fact that he’s no longer the centre of attention. The tantrums and tears are to be expected, and are realistically portrayed. 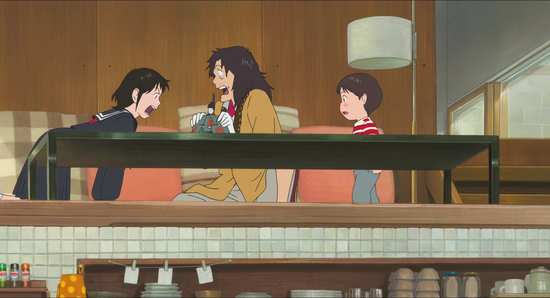 Things change when he heads into the courtyard in the centre of his home, open to the sky, a small garden really where he usually plays with the family dog, Yukko. Only now it’s a jungle inside a dome, and he’s confronted with his sister, all grown up, and looking for Kun’s help in fixing her past. She’s no longer just an uncommunicative baby. She’s grown up, she’s friendly, she’s fun to play with... it’s a whole new perspective. And that’s what the garden becomes whenever Kun has a tantrum, is mad at his parents, he gets a doorway to another time, a different perspective on his family that makes him reconsider his actions. 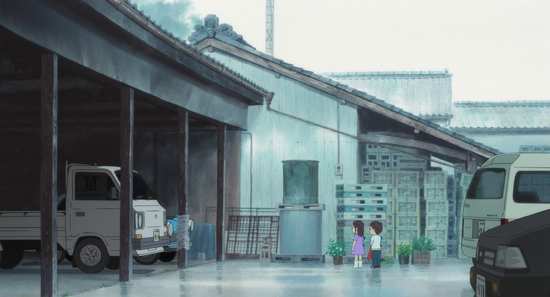 Normally you’d wonder about the mechanism behind these fantastic trips through time, but whether its time travel, whether it’s magic, or whether it’s all in Kun’s fertile imagination, it doesn’t really matter in Mirai. What matters is the growth that Kun goes through as he develops his sense of self, and where he fits into the family. Mirai manages the impossible in offering multiple perspectives to empathise with, and giving context to them all, whether it’s Kun’s conflict, the stressed out new mother, the sudden house-husband frazzled by overwork and more. It’s a great family film in that it works to bring families together through understanding. 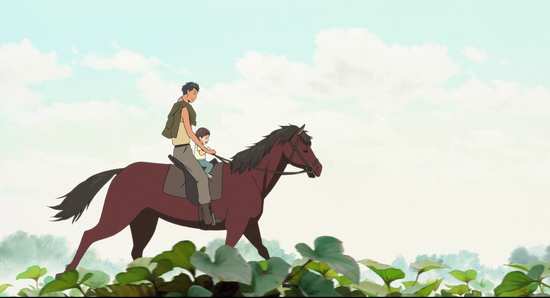 Mamoru Hosoda once again comes up with a film that you just have to have in your collection. If you want extra features, the Collector’s Edition is for you, but it’s a shame that the movie disc is so barebones.

Turns out that the US Region A locked release, and the AU Region B release are both packed with extra features.