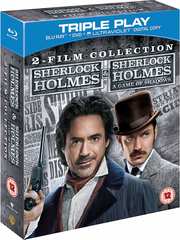 Article
French zombie movie The Horde out on DVD in September 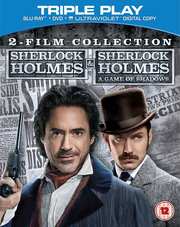 On a quest to solve a string of mysterious and brutal murders, Sherlock Holmes (Robert Downey Jr.) and his trusted ally Watson (Jude Law) plunge into a world of dark arts and startling new technologies, where logic, and a good right hook, are the best crime fighting weapons. Explosive action, baffling mystery and astonishing intrigue follow the two in a race to uncover and foil a terrifying plot that threatens to destroy the country. Director Guy Ritchie helms the all-action adventure reintroducing the great detective to the world. Robert Downey Jr. is the new Sherlock Holmes.

Sherlock Holmes - A Game of Shadows

Robert Downey Jr. reprises his role as the world's most famous detective, Sherlock Holmes, and Jude Law returns as his friend and colleague, Dr. Watson, in Sherlock Holmes: A Game of Shadows.

Sherlock Holmes has always been the smartest man in the room...until now. There is a new criminal mastermind at large--Professor James Moriarty (Jared Harris)--and not only is he Holmes' intellectual equal, but his capacity for evil, coupled with a complete lack of conscience, may give him an advantage over the renowned detective.

Around the globe, headlines break the news: a scandal takes down an Indian cotton tycoon; a Chinese opium trader dies of an apparent overdose; bombings in Strasbourg and Vienna; the death of an American steel magnate... No one sees the connective thread between these seemingly random events-no one, that is, except the great Sherlock Holmes, who has discerned a deliberate web of death and destruction. At its center sits a singularly sinister spider: Moriarty.

Holmes' investigation into Moriarty's plot becomes more dangerous as it leads him and Watson out of London to France, Germany and finally Switzerland. But the cunning Moriarty is always one step ahead, and moving perilously close to completing his ominous plan. If he succeeds, it will not only bring him immense wealth and power but alter the course of history.