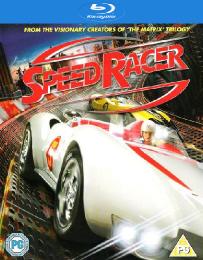 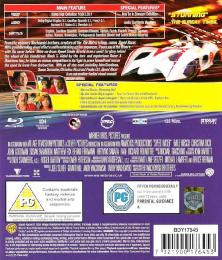 Blu-ray
An American Werewolf In London

Blu-ray
The Last House on the Left

Article
Dawn of the Dead on Blu-ray in October

Article
Who ya gonna call?!...

In 2003, following the experience of watching The Matrix Revolutions, and my subsequent contortions to try and convince myself, unsuccessfully that it was a half-decent conclusion to the saga, I made a vow to avoid anything the Wachowskis subsequently directed. But then in 2008, they made Speed Racer. Now I am an anime fan of long standing, and while I haven’t seen the original series, Speed Racer was a formative anime for many fans in North America. My need, nay duty to watch this film kept on conflicting with my determination to never watch a Wachowski movie again. It didn’t help that Speed Racer the movie got a mixed reception. Over the years I kept seeing the disc in bargain buckets all over the place, and I kept avoiding it. But finally, my desire to watch the film overrode my reluctance... by which point I thought the disc had been deleted. I had to get this one second hand...

Incidentally, it’s back in stock now... it was just one of those Covid induced disc deficiencies.

Racing has always been in the blood of the Racer family. As a child, Speed idolised his big brother Rex, who while driving the car built by their father, made a splash in the World Racing League. But the racing turned nasty, the press turned against Rex, and he was disgraced, ultimately dying in a crash during a rally.

Now Speed has grown up, and he’s become a racing driver too, thrilling the crowds with his clean racing, reminding fans of Rex at his best. He’s about to make an impact, when Royalton Industries show up, offering to sponsor the team. When Speed refuses, he learns just how dirty the racing scene actually is, and his family becomes threatened. Realising what actually happened to his older brother, Speed will have to find inner strength through his racing to change this messed up world. Luckily he has the aid of the mysterious Racer X.

Speed Racer gets a 2.35:1 widescreen 1080p transfer with the choice of Dolby Digital 5.1 Surround English, French, German, Italian, Spanish, and Swedish with subtitles in these languages and Dutch, Finnish, Chinese, Korean, Danish, Norwegian, and Portuguese. The image is pretty good, given that the film has a digital sheen, shot with a whole lot of green-screen and digital backlot. Detail levels are impressive, those primary and neon colours hit the retina with a jolt, and there seem to be no signs of compression or the like. Given that skin tones seem natural, I have to believe that Speed Racer was designed to make The Fifth Element look black and white. It is a little disappointing that the audio is lossy, and you do have to whack the volume up a bit more than usual to get a decent experience. Once done, the action comes across well, nice, immersive and kinetic, while keeping the dialogue focused and audible. The music drives the pace of the movie well, if not quite feeling memorable.

You get one disc in a BD Amaray. Put the disc in, and the film will autoplay. There’s only a pop-up menu, no top menu you can access from the film, but once the end credits have rolled, a static menu screen will appear. On the disc you’ll find the following, inconsequential and disposable extras.

When adapting anime/manga to live action, there are usually two routes open to the filmmaker. One is to ground the film in reality, make it work in a world, if not ours, then recognisably close to ours. This usually works best, as it’s easier for audiences to relate to. The other way is to throw reality to the wind, and commit completely and utterly to the original vision, making for a stylised and usually visually intense experience. Hideaki Anno’s Cutie Honey is one example, while Takashi Miike’s Yatterman was the epitome of visual excess. I say ‘was’ as the Wachowskis’ take on Speed Racer is probably more faithful even than that (I’ve never seen the original anime), offering an insanely kinetic, and ludicrously colourful visual experience, action sequences that conform to no laws of physics, and characterisations so thin and ephemeral, so single note, that they could have been lifted straight off a manga page from the sixties.

Speed Racer is not a good movie. It almost makes up for it in terms of the visuals and the experience, and it’s very much a film that needs to be seen to be believed. But it’s not a film that I can recommend watching twice. If you’re not going to create any depth when you’re adapting what is really a simplistic kids’ cartoon, then it should be no surprise that the resulting movie is shallower than a puddle. But just as if someone has dropped a little oil onto the surface of that puddle, the light reflecting off it sure gives some pretty rainbow colours.

There’s really not much to say about a movie where the heroes are purely heroic, where the villains are dastardly and evil, and where a person’s intentions and honour are only defined by how fast they can drive. About the only chink in Speed Racer’s armour is that unfortunate past, where it seems his older brother Rex strayed from the path before tragically dying. Now Speed has grown up and taken Rex’s place as the team driver, and he too has to act as a role model for the youngest brother Spritle (and his chimp). Speed also has his childhood sweetheart Trixie to keep him grounded. So when the evil Royalton shows up behind a paragraph of sweet words and promises, Speed is only briefly tempted by the offer of sponsorship. Refusal offends, and Royalton shows his true colours, revealing the whole sport to be corrupt. So now Speed has to battle the odds to change the world by driving really fast.

It is a thin story with thin characters, but the film’s one saving grace is the visual aesthetic. It is insanely bright and colourful, the kind of hyper-reality that can only be formed in the depths of a computer, so you pretty quickly get used to the idea of the whole film being utterly green-screened, and accept its version of reality. The races are insane, hyper-fast, gravity defying affairs, with cars loaded with gadgets, competing on tracks full of switchbacks and loop-the-loops, where an instant-save device means collisions and big explosions are par for the course. Occasionally the action gets too complicated, the screen too busy to keep track of, but generally the race sequences are really well done. Speed Racer could have been as good as Redline if the story had developed the other racers more, but with the focus on Speed, and the other racers just fodder for the races, Redline is by far the better film.

Speed Racer on the other hand is the most tedious jolt of adrenaline I’ve ever had. The action gets you excited even when the characters make you want to nod off. The visuals on the Blu-ray are excellent even now (I couldn’t imagine watching this film on DVD back in the day), but the audio just doesn’t cut it in this day and age. Speed Racer is well worth watching, but only the once.