You ever have one of those weekends where the info-flood threatens to inundate you? This Bank Holiday Weekend has turned out to be one of those. Not only was it the MCM Comicon weekend, when all of the major players in the UK anime industry get together at the Excel Centre in London to show off their new wares, announce new licences, and connect with the fans, but it turns out that this was the biggest Comicon in terms of anime that I can recall. The licence announcements started being dished out on Friday and they didn’t stop all weekend. So let’s work our way up the anime food chain, made a little more complicated as Jerome Mazandarani was there wearing both Animatsu and Manga hats. Some of these Manga licenses might turn out to be Animatsu licenses and vice versa.

Manga actually had the fewest new licenses to announce. Things have gone a little topsy-turvy in the UK anime world the past couple of years.

The Dragon Ball: Resurrection F feature film will be coming to the UK not long after the US release. There probably will be a theatrical run for this one.

Manga Entertainment will be releasing the first two Puella Magi Madoka Magica movies in a Collector’s Edition in July on BD and DVD, these are the recap movies which rework the series into features.

They will then release the third movie Puella Magi Madoka Magica: Rebellion on BD and DVD on September 28th.

Speaking of Animatsu, they have some particular delights lined up for us, beginning with A Certain Scientific Railgun Season 1 coming to the UK on DVD and BD this summer, followed by the news that they have licensed A Certain Magical Index Season 1 as well. These two shows have long been demanded by fans in the UK, longer even than the wait for Evangelion 3.33 (no news there), with Geneon and Manga’s inability to cross-connect the sticking point. With Animatsu there is no sticking point.

Knights of Sidonia Season 1 will be released in August on DVD and Blu-ray. The Blu-ray should be a deluxe edition.

All the Anime a.k.a. Anime Limited

They began early on Friday, with the reveal that they have Sword Art Online Season 2 with Part 1 of 4 coming in a Collector’s Edition in August. This is a big development given that Season 1 was released by Manga. Hopefully the Blu-ray authoring will be better this time.

The movie Fusé: Memoirs of a Huntress will be on Blu-ray and DVD in the UK.

Hot on the heels of their re-release of Durarara!! on Blu-ray last week, All the Anime announced the licence of the sequel, Durarara!! x2. This raises a question as to its release format (as allowed by Aniplex). Durarara!! x2 is a 3-cour series of which only one has been aired at this time. The convenient thing would be three, complete releases, but Aniplex may mandate more, splitting them up into two per cour.

All the Anime also have Aldnoah Zero from Aniplex.

Strap yourselves in. MVM usually have a habit of not getting ahead of themselves; only announcing three months ahead, which usually results in Amazon stealing their thunder by listing the titles on their site for sale, before MVM get a chance to announce them. Sure enough that happened this year with the following titles pre-empted.

MVM actually got one ahead with Amnesia, setting up a competition for the show on their site. It’s coming out on DVD and Blu-ray this July.

Muv Luv Alternative: Total Eclipse will be released in two parts, DVD and Blu-ray on 24th August and 19th October.

The Fate/Stay Night Unlimited Blade Works series has been licensed and should be out by the end of the year. This is the alternate retelling of the original Fate/Stay Night series.

Three of those were outed by Amazon, Fate/Stay Night was a surprise. And then MVM opened the floodgates and shared what they had licensed so far for 2016. There will be more licenses to come next year, but what we know so far is...

The words ‘Oh my God!’ passed my lips. 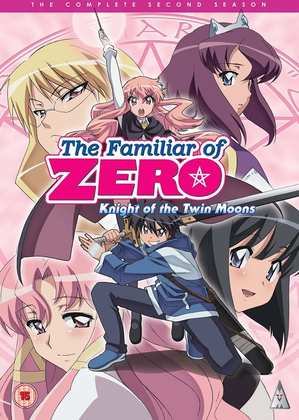 After all that, listing last week’s reviews seems like just an afterthought, but for the sake of completion, here goes and for a change from the recent status quo, it’s all review discs this week, beginning with Familiar of Zero: Season 2. When MVM released season 1, at the same time confirming that they had the rights to the franchise, it seemed that we’d be in for a lengthy wait for the other three seasons, as no one else had announced that they’d licensed them at the time. I would have put money on a two year gap, but it turns out that in less than a year, Sentai Filmworks licensed and released seasons 2 and 3, and so have Hanabee in Australia, with Season 4 just a matter of weeks away. With those particular ducks in a row, MVM can pull the trigger on Season 2, and Season 3 is out in the UK next month as well. It’s the further adventures of a hapless young Tokyo resident named Saito, who through means of magic got pulled into a fantasy world where he’s expected to be the familiar of an incompetent witch named Louise. In the second season, Knight of the Twin Moons, she becomes less incompetent, while he becomes a little less hapless. It could be the recipe for romance, were it not for the war! 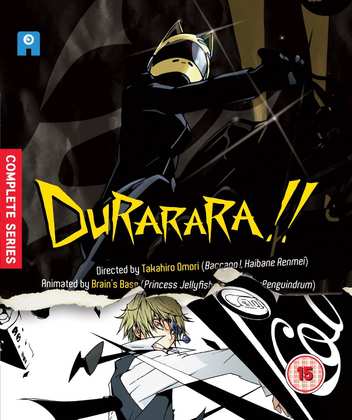 Then it was the turn for Durarara!! the first season, again. I’ll never tire of re-watching this particular show; its gift for complex narrative and engaging characterisation is all too evident. But this time the Standard Edition Blu-ray release of Durarara!! promised something special... It promised to work. Durarara!! had a rough ride to home media, on DVD on last year’s Limited Edition Blu-ray release, which was plagued with petty subtitling errors to the detriment of the viewing experience, and on top of that missed out on a songs and signs only track for the English dub, essential in a show such as this. All the Anime promised to rectify the issues with a disc replacement programme for the Limited Edition, and purchasers of the Standard Edition can benefit from that hard work and expenditure. This unmissable show really is unmissable now. Eschewing the usual trailer, here’s my favourite anime opening theme of all time, probably. 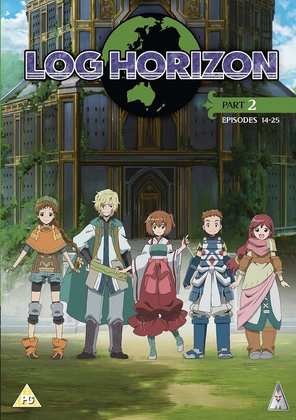 Finally for the week, I took a look at Log Horizon Part 2. I’m going to have to do a Paddy Ashdown on this one, refusing to eat my hat after swearing blindly that I would never have anything to do with one of those online RPG anime shows. Log Horizon may just be the exception to the rule, or it might be the one show that converts me to the genre. But there’s something about the depth to its writing, the thoughtfulness gone into its concept that draws me to it. It’s an engaging and smart show, and in Part 2, that depth really does become apparent as the story unfolds in unexpected ways. 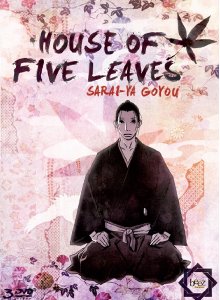 House of Five Leaves. It hasn’t been too long since I last saw this show, but sometimes I do feel in the mood for some slow, thoughtful, contemplative, character-based storytelling, and House of Five Leaves certainly fits that bill, accomplishing more through atmosphere and style than most other shows can manage with all the eye-candy and fan service at their disposal. It’s a tale about an unlikely shy samurai named Masa who falls in with the wrong crowd, the Five Leaves criminal group that make their living from kidnapping children of high ranking families and blackmailing a ransom. But the fact of the matter is that the Five Leaves group is the unlikeliest group of brigands that you can imagine. Their leader, Yaichi takes an interest in this unlikely samurai, and invites him to join the group. But Masa’s shyness hides a tactlessness that slowly begins to unravel the Five Leaves’ secrets.

It’s a fabulous show that uses a wholly unlikely visual style, far removed from the usual anime aesthetic, and it’s all the better for it. It was released in the UK on DVD by Beez, one of their final releases, and I’ve reviewed that Beez release of House of Five Leaves. Click on the review if you’re interested. While the company may be defunct, there is still stock available to buy. One reason might be that the release was technically flawed, its audio suffering from distortion and phasing issues. If you can see past that, the Beez edition will suffice, but a better quality release can be had via import from Australia or the US.