Article
War drama The Final Sacrifice out on DVD this January

Article
John Banville's The Sea comes to DVD in June 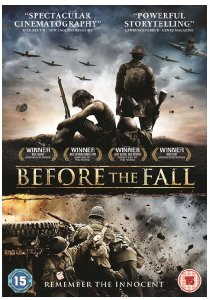 Inspired by true life events, BEFORE THE FALL is a fascinating, enthralling and ultimately powerful depiction of life inside the military schools Hitler set up, in order to groom young soldiers for positions of power.

Set in 1942, Fredreich Weimer (Max Riemelt) is desperate for a life filled with more than working in a factory. He enrols in a high school focused on producing elite Nazi soldiers. He soon discovers more than he bargained for, as he experiences first hand the atrocities and cruelty taking place.

With his innocence lost Fredreich soon tries to rebel against the repressive system, but is he in too deep? BEFORE THE FALL takes a unique viewpoint on World War II and is filled with performances that offer intricate layers of feeling.

Receiving critical acclaim from several festivals worldwide, director Dennis Gansil has created a work of exemplary craftsmanship and is set to become a classic coming of age story for many years to come.