Blu-ray
The Other Guys: Extended Cut

Blu-ray
The Pirates! In an Adventure with Scientists (Blu-ray 3D)

Blu-ray
Once Upon a Time in... Hollywood

Article
Horror flick Frankenhooker is coming to Blu-ray in January

Article
Turn It Up out on DVD in March

Article
Masters of Sex: Season 1 comes to DVD in July 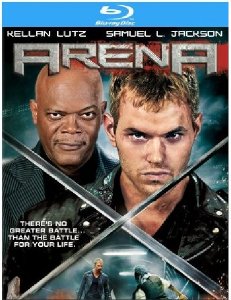 Twilight's Kellan Lutz and Oscar® Nominee Samuel L. Jackson
Face Off In The Savage And Brutal World Of
ARENA

The Death Games Begin January 2 on Blu-ray™ and DVD

This hard-hitting film stars Lutz as a man kidnapped from his ordinary life and thrust into the savage world of a modern day gladiatorial arena where men fight to the death for the entertainment of the online masses. Jackson is "at his sinister best" (Tim Jansen, Media Entertainment) as the sadistic businessman behind the underground operation. ARENA co-stars Nina Dobrev (The Roommate, "The Vampire Diaries") and Daniel Dae Kim ("Lost," "Hawaii Five-0"). Action fans won't want to miss the life-or-death excitement when ARENA debuts on Blu-ray™ for RRP £17.99 and DVD for RRP £12.99.

Synopsis
How do you make a fortune from the bloodlust of millions? One sadistically savvy businessman (Samuel L. Jackson) has created an empire with his brutal, fight-to-the-death gladiator website. His newest warrior is David Lord (Kellan Lutz), a kidnapped fireman, now imprisoned and forced to fight for his life. To buy his freedom, Lord agrees to do a series of lethal bouts. But as the body count escalates, and with his most challenging battle remaining, Lord unleashes a torrent of bloody carnage and reveals a secret that threatens to tear down the entire enterprise. Also featuring Daniel Dae Kim (TV's "Lost") and Nina Dobrev (TV's "Vampire Diaries").

Pricing and bonus features on Digital editions of ARENA may vary by service provider.

"Academy Award" and "Oscar" are registered trademarks of the Academy of Motion Pictures Arts and Sciences.