Blu-ray
Spider-Man Into The Spider-Verse 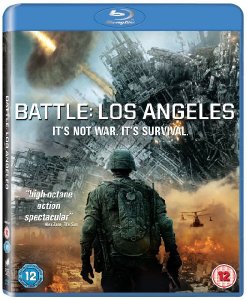 "…spectacular sci-fi full of all the thrills, explosions and combat action you could hope for" 8/10
- Alan Frank, Daily Star

For a limited time the BATTLE: LOS ANGELES Blu-ray will include a code to access an exclusive playable game demo of the first-person shooter PS3™ game Resistance 3™. The code in-pack can be used to download the Resistance3 demo directly from PlayStation™ Network. Resistance 3, the latest installment in the multi-million selling post-apocalyptic franchise, will be available in September from developer Insomniac Games and Sony Computer Entertainment. In addition to the incredible thrills of the year's top action/sci-fi film, Blu-ray fans around the world will be the first to sample nearly one half-hour of game play from the upcoming Resistance 3, assuming the role of hero Joseph Capelli as he travels by boat to St. Louis through the flooded and deadly waters of the Mississippi fighting off a relentless alien race, the Chimera. The exclusive playable game demo will only be available to adults aged 18 and over.

The Blu-ray edition also includes a "Command Control" interactive viewing mode, allowing audiences to experience the film with picture-in-picture featurettes, storyboard comparisons and Battle Points within the context of the movie. BATTLE: LOS ANGELES will be available for £24.99(BD) and£19.99 (DVD).

About BATTLE: LOS ANGELES
For years, there have been documented cases of UFO sightings around the world -- Buenos Aires, Seoul, France, Germany, and China. But in 2011, what were once just sightings will become a terrifying reality when Earth is attacked by unknown forces. As people everywhere watch the world's great cities fall, Los Angeles becomes the last stand for mankind in a battle no one expected. It's up to a Marine staff sergeant (Eckhart) and his new platoon to draw a line in the sand as they take on an enemy unlike any they've ever encountered before. BATTLE: LOS ANGELES was written by Chris Bertolini (The General's Daughter) and produced by Neal H. Moritz and Ori Marmur (The Green Hornet, The Bounty Hunter). Executive producers are Jeffrey Chernov (upcoming Mission Impossible: Ghost Protocol, Star Trek) and David Greenblatt. It was distributed by Columbia Pictures and has a run time of approximately 116 mins. It has been rated12.

About Resistance 3:
August, 1957. America is lost. Four years after the end of the critically-acclaimed Resistance® 2, dishonorably discharged Sentinel Joseph Capelli has given up fighting the Chimeran menace. Now he's in hiding with other survivors, including his wife and young son. But when Dr. Fyodor Malikov arrives with the opportunity to deliver a blow to the occupying Chimeran force, Capelli must leave his family and journey the harrowing road from Oklahoma to New York City. Along the way, he'll encounter the remnants of humanity left in the aftermath of the brutal Chimeran invasion. Powered by Insomniac Games' fifth-generation PS3 technology, Resistance 3 portrays Capelli's heroic survival inside the brutal Resistance world. Featuring new upgradeable weapons, the return of the weapon wheel, two-player online or split-screen campaign co-op and a progression-based multiplayer experience, Resistance 3 delivers a heroic-yet savage first-person shooter experience for the PS3 system.

Visit Sony Pictures Home Entertainment on the Web at www.SonyPictures.com