Blu-ray
Half a Loaf of Kung Fu
Related Articles 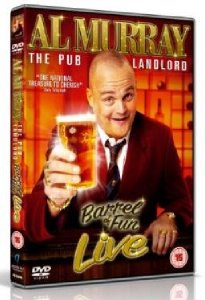 All hail to the ale! as Britain's favourite publican returns with a brand new live DVD, available to own from 22nd November. Filled to the brim with the ultimate in bar-based logic, Barrel of Fun Live sees THE PUB LANDLORD open the doors to his all-new 2010 show, recorded live at the Hammersmith Apollo during his non-stop autumn tour. Serving up his trademark premium-strength brew of Common Sense reasoning, Barrel of Fun Live also sees THE GUV pour double measures and offer his 1996 Perrier Award-nominated debut The Late Lock In as a full-length bonus extra. This show was filmed last year when it was performed as a one-time-only special at the 2009 Edinburgh Festival Fringe to a venue jam packed with comedy fans.

Barrel of Fun Live sees the ever-selfless PUB LANDLORD once again turn his attention to the needs of his Beautiful British public. From global warming, the Taliban and a PC-world gone mad - to the true threat to mankind, the subtle nature of human nature and err…ahem…erectile dysfunction, THE GUV applies his glass-half-drunk logic to modern day stresses and strife. He also champions the causes that have caught his charitable eye like Ginger Rights for the ginger haired, "they're the British Aborigines and need to be left alone", the benefits of a British Pope, and some killer chat-up lines for the romantically-challenged.

Supersizing his DVD offering for 2010, Barrel of Fun Live also features THE PUB LANDLORD's universally acclaimed debut The Late Lock In. Filmed last year at the Edinburgh Festival Fringe (aka THE GUV's spiritual home), it sees THE PUB LANDLORD perform - for one night and one night only - the show which first catapulted him to comedy hierarchy. On top of this bonus gig, other exclusive extras include: 'Alistair Murray: Sous le Veston', an exposé into the man beneath the blazer for the French Arts Channel; behind-the-scenes coverage from the Compete for the Meat quiz shows at this year's Edinburgh Festival Fringe; and a no-holds-barred fly-on-the-wall documentary following AL as he prepares for a brand new tour - from starting a show from scratch in the summer, to storming the prestigious Hammersmith Apollo only three months later.

This DVD is released following THE PUB LANDLORD's return to the road with Barrel of Fun, his brand new stand-up show for 2010, and marks the end of another non-stop 12 months which has seen him: release The Pub Landlord's Great British Pub Quiz Book, the follow-up to his two best-selling humour books - the Richard and Judy Book Club-winning The Pub Landlord's Book of British Common Sense, the most successful humour book of 2007/8, and last year's critically acclaimed self-help tome, Think Yourself British by Al Murray, The Pub Landlord; perform a sell-out run of the critically acclaimed Compete for the Meat pub quiz at the 2010 Edinburgh Festival; play over 80 shows and sell in excess of 230,000 tickets on the three times extended Beautiful British Tour; release a top selling live DVD, recorded at London's O2 Arena, THE GUV's biggest lock-in to date; and headline BBC ONE'S flagship comedy show Live at the Apollo (BBC ONE).

"Yes, after 15 years as the Little Englander loudmouth, Al Murray is still playing his part with as much aplomb as any comedian currently working.The way he integrates the crowd into the show is awe-inspiring."
Dominic Maxwell, The Times

"What sets Al apart is his extreme quick wittedness. His interaction with the front few rows is legendary and nothing throws him…Thoroughly recommended."
David Lowe, The Sun


WHAT THE PRESS SAID ABOUT:

After 15 years of refining his act, it's now in peak satirical condition. The Pub Landlord can pick out targets for his blinkered, chauvinist ire with the finesse of a master marksman… Few other acts reach quite so comfortably inside the confused, wounded mindset of the modern Brit. As our economy founders, here's one national treasure to cherish.
★★★★★
Dominic Cavendish, Daily Telegraph

What sets Al apart is his extreme quick wittedness. His interaction with the front few rows is legendary and nothing throws him. He can mock his victims to death, but he does it with a smile that leaves them starstruck rather than squirming. Thoroughly recommended.
★★★★★
David Lowe, The Sun

Yes, after 15 years as the Little Englander loudmouth, Al Murray is still playing his part with as much aplomb as any comedian currently working. And, for much of this enjoyably unacceptable two-hour set, he's beyond reproach. The way he integrates the crowd into the show is awe-inspiring.
★★★★
Dominic Maxwell, The Times

The secret of the Pub Landlord's longevity has been his ability to move with the times… The show ends with a plea for liberal tolerance, which would set Garnett's ashes glowing in their urn. And it's a tribute to the persuasive force of the character Murray has created - and the skill with which he inhabits him - that the blatant contradiction between this ideological stance and the snug-bar xenophobia which is the Pub Landlord's comic staple diet seems to go largely unnoticed.
★★★★
Ben Thompson, The Sunday Telegraph

Murray certainly delivered. Strutting onto a stage surrounded by grand columns shaped like beer pumps he was soon is his bullet-headed, bantering element... working the entire stage, wading into the crowd and getting the sold-out audience to sing as one.
Bruce Dessau - Evening Standard


WHAT THE PRESS SAID ABOUT:

AL MURRAY, THE PUB LANDLORD AT THE
2009 EDINBURGH FESTIVAL FRINGE

His greatest talent is his interaction with the audience, and a room like this, where he can get in among us, is where that can be experienced in full effect.
★★★★
Steve Bennett, Chortle

It is pretty much indisputable that Murray is a master comic. He hides his technical skill and preparation behind a comedy facade of off-the-cuff remarks and asides to the audience. These have not changed, only matured.
★★★★
Kate Copstick, The Scotsman

One of the more enjoyably foolish ways of spending a lunchtime.
Mark Monahan, Daily Telegraph

Hosting his own pub quiz in the intimate confines of the Ace Dome, the Pub Landlord spares no quarter from his superluminally-quick, haranguing banter, sharp as a tequila shot but as inoffensive as a pint of mild.This is simply brilliant knockabout fun. No question.
★★★★
Steve Bennett, Chortle

A chance to see a national treasure at close quarters.
Stephanie Merritt, The Observer 'New Review'

Have a laugh and spend an hour and a half with one of the comedy greats in his own back yard so to speak.
★★★★
Geoff Evans, One4Review

A thoroughly entertaining 90 minutes where he integrated every single member of the audience into the show. Al Murray is on top form in this brand new format.
Alison Leslie, Edinburgh Spotlight

This was one of the more interesting show set-ups I have attended - more relaxed and extremely entertaining. I now see why Murray draws such a wide crowd - we all see shades of ourselves within his creation of: The Pub Landlord. If you have managed to get a ticket, you will enjoy Murray's comedic quiz stylings no end - just make sure you swat up on the most random topics you can think of.
★★★★
J D Stewart, Edinburgh Guide

Everyone who's seen Al Murray perform knows he's at the top of his game ...This show, a laddish, lunchtime pub quiz, showcases his undeniable skills in spontaneous rapport and derision, and the informal set-up reveals him to be an expert compere, directing the quiz with boisterous authority and playing his participants against one another with macho jibes.
Kit Buchan, Three Weeks