Blu-ray
Highlander: The Search For Vengeance

Article
The Smurfs: Tis the Season to be Smurfy is out on DVD for Christmas

Article
Art of the Gunslinger hits DVD in July

Article
Masters of Sex: Season 1 comes to DVD in July

Article
A Field in England out in cinemas, DVD, TV and download all on the same day in July 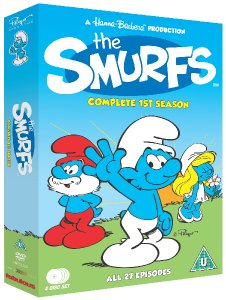 This classic long running children's series originally broadcast on LWT from 1982-1985 and BBC from
1996 -2002 has never been released on DVD
in the UK until now!

DVD INFORMATION
Arrow Films / Fabulous Films have secured the Home Entertainment rights to the cult classic 1980's Hanna-Barbera produced Smurfs cartoon series and the original 1976 feature film 'The Smurfs and The Magic Flute'. The original series has never been available before on DVD in the UK. Sony Pictures are currently in production of a $100 million live action/animated feature film that is scheduled for a worldwide theatrical release in July 2011. It is being directed by Raja Gosnell (Scooby Doo, Scooby Doo -Monsters Unleashed, Big Momma's House). The animated characters are being voiced by Katy Perry, Alan Cumming and Hank Azaria amongst others.

BACKGROUND
The Smurfs is a comic and television franchise centered on a fictional group of small blue creatures called Smurfs, created by and first introduced as a series of illustrated comic strips by the Belgian cartoonist Pierre Culliford (also known as Peyo) on October 23, 1958. Culliford's initial comic first appeared in the Belgian magazine Spirou, and several decades later was adapted into an English language children's television series by Hanna-Barbera Productions, titled The Smurfs.

SYNOPSIS
Far, Far Away, in a little mushroom village live a group of little blue pixies in short trousers and white bonnets called Smurfs. Only as tall as 3 apples, they speak in 'Smurf', a language only they understand. The Smurfs are carefree, peaceful creatures that live in harmony with nature. But they have a nasty habit of wanting to act like humans which causes them 1001 problems!

The Smurfs are a worldwide smash and have been for a decades. Over 300 million Smurf Toys have been sold and 256 episodes of this series were produced over 9 seasons by Hanna Barbera. A truly defining animation series that continues to captivate generations of fans young and old.

The Smurfs Complete 1st Season is distributed by Arrow Films & Fabulous Films and is available from all good DVD stockists from 5th July 2010.
www.arrowfilms.co.uk