Blu-ray
The Princess and the Frog

Blu-ray
Tinker Bell and the Legend of the Neverbeast

Article
Extraordinary Measures out in June on DVD

Article
James Nesbitt stars in Blessed out on DVD in June

The Princess & The Frog hits Blu-ray and DVD in June 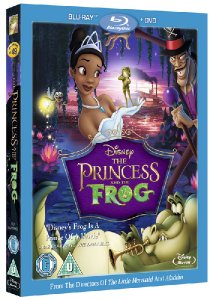 THE PRINCESS AND THE FROG

Walt Disney Studios Home Entertainment invites you on an enchanting musical adventure through the deepest parts of New Orleans in the Oscar® nominated The Princess and the Frog, available on Disney Blu-ray and DVD from 21st June 2010.

A timeless heroine in the tradition of Snow White, Ariel, Jasmine and the rest of the beloved Disney Princesses, Tiana comes to life with timeless Disney animation from the revered team of John Musker and Ron Clements (Aladdin, The Little Mermaid) and a jazz-infused musical score from Academy Award® winning composer Randy Newman (Best Original Song, Monsters Inc., 2001).

The Princess and the Frogis a fairytale musical set in 1920's New Orleans, which tells the story of Tiana (Anika Noni Rose - Dreamgirls), a simple waitress with big ambitions. When Tiana is mistaken for a princess by Naveen, the Prince of Maldonia, (Bruce Campos - Nip/Tuck), now a cursed frog, he asks for one kiss that he hopes will break the spell…But what neither of them expect is for the kiss to transform Tiana into a frog too…

This magical escapade was nominated at the 82nd Oscar Academy Awards®, in the Best Animated Feature and Original Song categories, and includes a host of stars lending their voices. Oprah Winfrey as Eudora, Terrence Howard as James and John Goodman as Big Daddy' La Bouff, all work to create a fun-filled musical masterpiece sure to establish itself as a Disney classic.

Delve inside the world of Princess Tiana with a royal procession of exclusive bonus features, including Mama Odie's Princess Portrait Game and wonderfully crafted deleted scenes with accompanying commentary by the filmmakers. The fantastic New Orleans inspired music video for Never Knew I Needed by R 'n' B sensation Ne-Yo also features on the Blu-ray and DVD, adding to the hours of family entertainment.

Bring the magic of this charming story to the comfort of your own home. The Princess and the Frog is a heart-warming and charming animated musical that families will want to enjoy again and again.

• Games & Activities
What Do You See: Princess Portraits: Mama Odie welcomes us to the bayou, where Ray's firefly family has just outlined a picture of Tiana. Mama Odie proposes a game to test the viewers' knowledge of princesses. Ray's firefly family will arrange themselves to create a picture of one of the princesses. If the viewer correctly identifies which princess is seen in the formation they make, they are rewarded with a brief - hip, and slightly irreverent - re-telling of that princess' story, which plays as a montage on the surface of the water.

• Magic in the Bayou: The Making of The Princess & The Frog: A freewheeling, documentary-style ramble through the making of Disney's newest animated film. This piece will capture both the spirit and the story of how THE PRINCESS AND THE FROG emerged from a vague concept in the minds of Musker and Clements, to become a splashy, lavish animated film set in the enchanting, mythical world of New Orleans and the surrounding bayous.