DVD
Tammy and the Bachelor

DVD
Lubitsch in Berlin: The Masters of Cinema Series

DVD
The Avengers - Series 2 And Surviving Episodes From Series 1

Article
Gumball 3000 out on DVD and iTunes this April

Article
Ju-on double bill out on DVD this April

The Littlest Hobo finally arrives on DVD in April 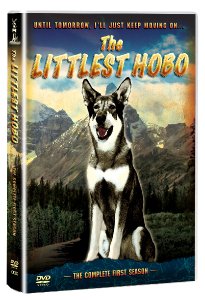 Littlest Hobo was first broadcast on ITV in 1979


SYNOPSIS
The Littlest Hobo for a generation of kids which are now young adults was iconic TV series that ran throughout their childhood. It was the Lassie for the 80's generation and with one of the most memorable theme tunes ever recorded it takes people back as only nostalgia can to when life was simpler and you were happier…………

In 1979, CTV revived the series, which unlike the previous series was shot on videotape rather than on film. It aired in the U.S. in syndication. Over six seasons the New Littlest Hobo (as it was sometimes called) featured many big-name Hollywood guest stars (such as Alan Hale, Jr., DeForest Kelley, Morey Amsterdam, Patrick Macnee, Vic Morrow, Henry Gibson, John Carradine, Leslie Nielsen and a young Mike Myers) and plotlines that ranged from traditional "dog helps boy" stories to outlandish secret agent-type tales. Its theme song, "Maybe Tomorrow", was sung by Terry Bush. The song was commercially released in 2005 by Terry Bush as part of his debut album, also entitled Maybe Tomorrow.[1] It was also performed by Ronan Keating of Boyzone during the 2009 Children in Need telethon.

DVD CONTENTS
All 24 episodes from Season 1
Singalong - 'Maybe Tomorrow'
Short Feature: 'How to train a dog like London' by the dog trainer Chuck Eisenmann who trained all the dogs for the show.
Episode Synopsis
Motion Menus

Littlest Hobo Complete First Season is distributed by Mediumrare Entertainment and is available from all good DVD retailers
from 26th April 2010.