DVD
The Best of Never Mind the Buzzcocks

Article
Jim Davidson Live out on DVD this November

Article
River Cottage Autumn out in November on DVD 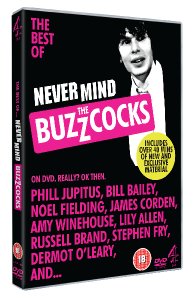 The Best of Never Mind The Buzzcocks

On DVD. Really? Ok then.

Released exclusively by 4DVD on Monday 16th November 2009Watch the clips that were too rude, too drunk, too nasty, too sweary and too awkward for TV on The Best of Never Mind The Buzzcocks DVD - a must for all fans.

Never Mind The Buzzcocks, the legendary satirical music series known for its dry sarcastic humour and caustic wit, is available to own for the first time on DVD on Monday 16th November courtesy of 4DVD. The hugely popular show first hit our TV screens in 1996 and became an instant hit with comedy fans. It's been running for 13 successful years and 22 series later it's still going strong. With the show's reputation for the unpredictable, celebrity guests are primed for the occasional embarrassment and harmless ribbing, as their knowledge of music is put to the test.

Featuring the best bits from the last 3 series hosted by award winning comedian Simon Amstell, fans can relive his most cutting remarks and riotous banter that make this DVD unmissable viewing.

Long-serving team captain Phill Jupitus joins Simon on the DVD as they look back at some of the most memorable and controversial moments - where no celebrities are off limits to their verbal sparring. Re-live the iconic moments when Preston stormed out, Amy Winehouse spat on the floor and a drunken Donny Tourette was ridiculed by Simon and Bill Bailey.

The Best of Never Mind the Buzzcocks also boasts exclusive, never-before-aired deleted material with some of the show's rudest comments and funniest scenes that didn't make TV, including highlights of the most-talked about and controversial comedian in 2008, Russell Brand.

Russell infamously appeared as guest captain in an episode that has never been broadcast due to his suspension from the BBC. Excitingly, fans can watch hilarious highlights of this episode which features Russell's lewd banter with celebrity guest Rachel Stevens and Russell threatening to walk off Preston style as Simon reads extracts from his Booky Wook.

Since the departure of team captain Bill Bailey, celebrities have been queuing up to have a go; guest captains have included Noel Fielding, Dermot O'Leary, James Corden, Mark Ronson, and Stephen Fry.

Featured on the DVD are the special compilation episodes from the last 3 series:

The Best of Never Mind The Buzzcocks is available to own on DVD on 16th November 2009 by 4DVD.

NEVER MIND THE BUZZCOCKS is a talkbackTHAMES Production for BBC TWO.

Never Mind The Buzzcocks scooped the Best Entertainment Programme award at the Broadcast Awards 2008 and Best Comedy Entertainment Series at the British Comedy Awards in 2007.