DVD
Robert Schimmel: Life After Then

Jim Davidson Live out on DVD this November 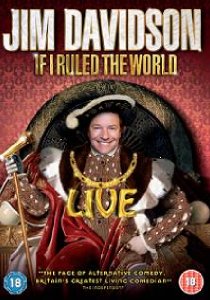 
Jim Davidson throws the rule book away. The multi award-winning king of comedy does it his way in his most outrageously funny stand-up show yet. Hold on to your seats for a roller-coaster ride through the world according to Jim.

As controversial as ever, politically incorrect... but shockingly funny, Jim's brand new live DVD If I Ruled the World-Live was filmed live at his 'court' - Cliffs Pavilion, Southend - in front of a rabble of faithful 'squires' and their ladies. King Jim gives the crowd exactly what they want, telling tales of wanton women, speaking his mind about pointless wars and pushing the boundaries on all manner of forbidden topics. All rise and salute King Jim and let him show you his world... if he had his way!

This brand new DVD will include an exclusive extras package including candid Jim Davidson interview with Garry Bushell.

Since emerging from television's New Faces, Jim Davidson has firmly established himself as one of Britain's top stand-up comedians and is well-known to TV viewers as the host of prime time BBC TV shows Generation Game and Big Break. His success also embraces smash-hit videos, DVDs, CDs, writing bestselling books and producing hit West end shows. He regularly plays sell-out tours of his live adult shows and his debut tour of Australia, earlier this year, was a massive hit. He received critical acclaim for his role in the film Colour Me Kubrick, in which he worked with John Malkovich. Jim received an OBE for his services to charity and has three coveted 'Showbusiness Personality of The Year' awards.

If I Ruled the World - Live will be released on 16th November 2009 to coincide with a major UK tour.